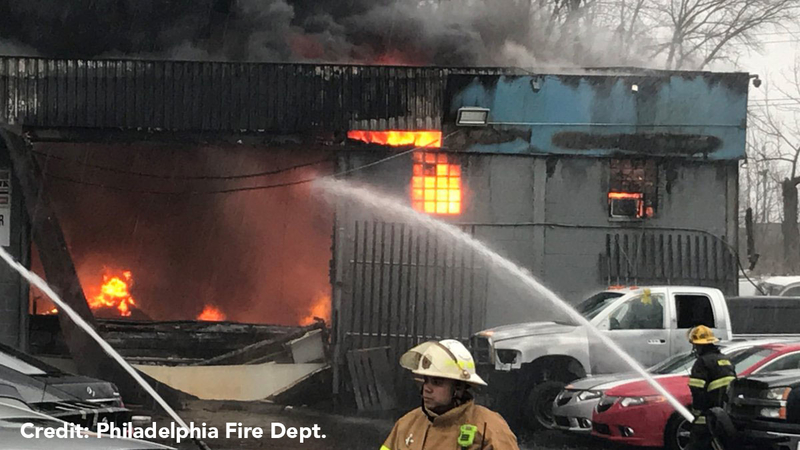 NORTHEAST PHILADELPHIA (WPVI) -- Parts of the Roosevelt Boulevard were shut down on Friday morning as firefighters battled a three-alarm blaze in Northeast Philadelphia.

The fire erupted around 8:45 a.m. in an auto body shop on the 2000 block of Bennett Road near the Boulevard.

Companies arrived around 8:45 a.m. to find heavy fire through the roof of an auto body shop on the 2000 block of Bennett Road. It took more than 90 minutes to bring this fire under control. pic.twitter.com/GxlCGs0RJH

Four employees inside the building were able to escape.

"It was all challenging because you couldn't access it from railroad side, so we had to fight it from three sides instead of four like we normally do," said Deputy Commissioner Craig Murphy.

The proximity to the railroad also created water supply issues.

Roosevelt Boulevard was shut down in both directions as water was pumped from hydrants on the other side of the major thoroughfare.

No injuries reported in fire at NE Philly auto body shop. Had water supply issues due to proximity to railway. Fire under control. pic.twitter.com/woD8VASMTG

The fire was placed under control around 10:30 a.m but crews remained dousing hot spots.

There was no immediate word as to what sparked the fire.