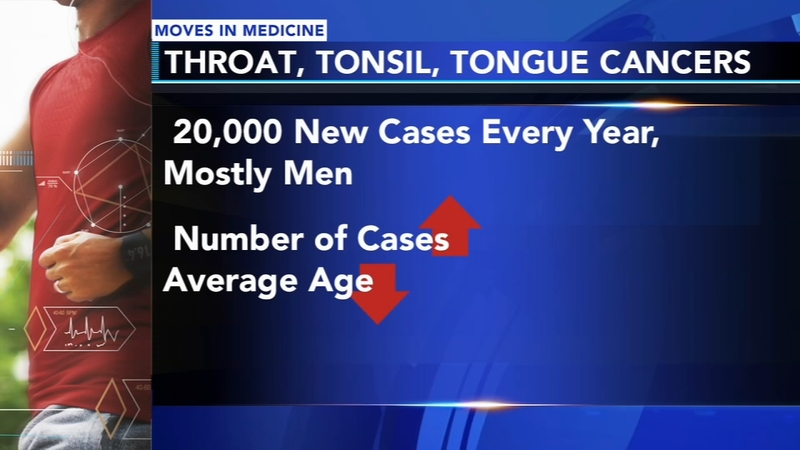 LANSDALE, Pa. -- Smoking and alcohol used to be the primary causes of head and neck cancers.

But now, HPV, the human papillomavirus, is the main cause by far.

Leonard Balk, a Lansdale business owner, is sharing the story of his battle with one five years ago.

Balk said the first sign came after one of his many business trips.

After a variety of diagnoses from doctors, Leonard took a relative's advice to see Dr. Jeffrey Liu of Fox Chase Cancer Center.

"Opened my mouth, he looked down my throat. He said you have cancer. That was it. He knew immediately," he says.

Leonard felt reassured by Dr. Liu's calm, clear explanation of the tumor and how it could be treated.

About 20,000 Americans - mostly men - develop cancer of the throat, tonsils, or base of the tongue every year.

The number is rising, while the average age is down.

Dr. Liu says he used to see many men in their 60s, and the cancers were driven by smoking and alcohol. Now, he says, "There's a lot more seen in the 40s to 50s.

The cancers are caused by HPV, the virus which also causes cervical cancer in women.

Although most people get exposed to HPV, some people don't clear it from their bodies.

"Their virus remains dormant for some reason. And then typically, years to decades later, it develops into this cancer," he notes.

Dr. Liu says that while the locations out of eye view make these cancers hard to find, they respond better to treatment than tobacco or alcohol-related tumors.

Leonard was relieved that Dr. Liu recommended radiation alone for his treatment. One doctor he consulted thought extensive surgery on his tongue and skin grafts would be necessary.

To counter Leonard's painful throat during his accelerated course of radiation, his wife Lisa, a nurse, became an important part of his support team.

"The wife part of me went away, because I needed to have my nurse hat on." Lisa notes.

For his mouth pain, she first used an oral anesthetic that he swished around his mouth. The compound included lidocaine.

"It would actually numb his throat so he'd be able to swallow," says Lisa.

Then he drank a nutrient-packed milkshake.

"I only had like a two-time-a-day chance to get the nutrition his body needed," Lisa says.

"The worst part for me was the mucus buildup in my throat and the burning in my tongue. No matter what food I put in my mouth, everything burned," Leonard recalls.

He got through the 12-week course, even making a European business trip sooner than expected.

"The caveat was that

And he's been in remission five years.

"We want to make sure on the backend that their side effects and their long-term effects are a little as possible, so they can resume their life - spend time with their family, you know, most importantly, eat, drink, swallow, and talk, which is really where this cancer affects," says Dr. Liu.

Experts believe the HPV vaccine, which has dramatically cut cervical cancer rates, will also cut throat and tongue cancer among young people who have been vaccinated.

"It's important to know we have a vaccine that prevents cancer, " says Dr. Liu, adding, "I think that's an amazing piece of scientific technology."

Although the CDC recommends the HPV vaccine at age 11 or 12, you can now get it up to age 45, if you weren't vaccinated earlier.

Dr. Liu says the vaccine may also turn out to be a treatment.

"There are a couple of active investigations throughout the country looking to see about partnering the vaccine with some other drugs to try to get the body's immune system ready to try to attack this cancer, " notes Dr. Liu.
Report a correction or typo
Related topics:
health & fitnessmoves in medicine fccc
Sponsored Content
MOVES IN MEDICINE FCCC
SPONSORED: Working together to protect a young woman's heart during cancer care
SPONSORED: Monarch marks milestone for Fox Chase Cancer Center
SPONSORED: Doctors say bypass can prevent lymphedema after cancer surgery
SPONSORED: Genetic testing helping doctors fight pancreatic cancer