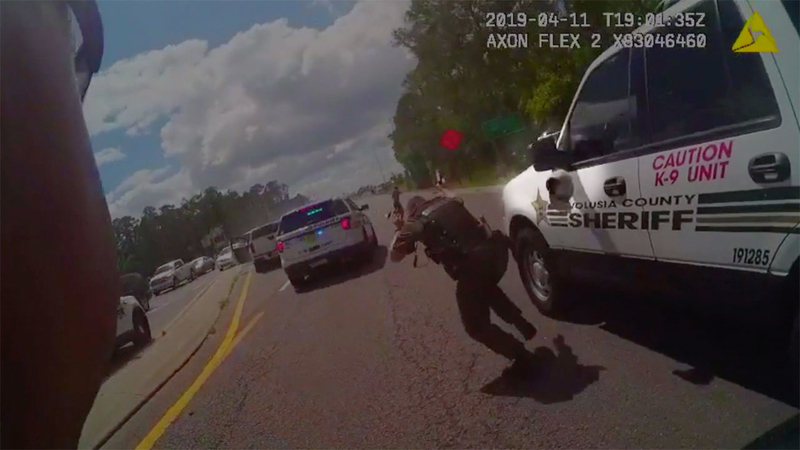 DELAND, Fla. -- A carjacking suspect was fatally shot and a sheriff's sergeant's forehead grazed by a bullet during a dramatic shootout on a Florida highway.

Volusia County Sheriff Mike Chitwood said in a news conference the shooting happened Thursday afternoon near DeLand following a chase across the county.

Authorities said 30-year-old Phillip Marsh stole a woman's pickup truck at gunpoint in Deltona. Chitwood said Marsh brandished a gun as deputies chased him and tried to flee on foot after they destroyed the truck's tires with spike strips.

Marsh pointed his gun at his own head at one point, according to aerial footage released by the sheriff's office.

A group of deputies eventually surrounded the man. Chitwood said Sgt. Tom Dane and four other deputies exchanged gunfire with him. Dane was grazed, and a fellow deputy's body camera captured the moment the bullet sent his hat flying off of his head.

Dane's injuries were described as minor, and Dane was awake and alert after the shooting. Dane likely would have been fatally injured had the bullet hit a millimeter lower, Chitwood said.

Marsh was shot several times and later died at an area hospital.

The deputies involved in the shootout have been placed on paid administrative leave pending the outcome of a department investigation.