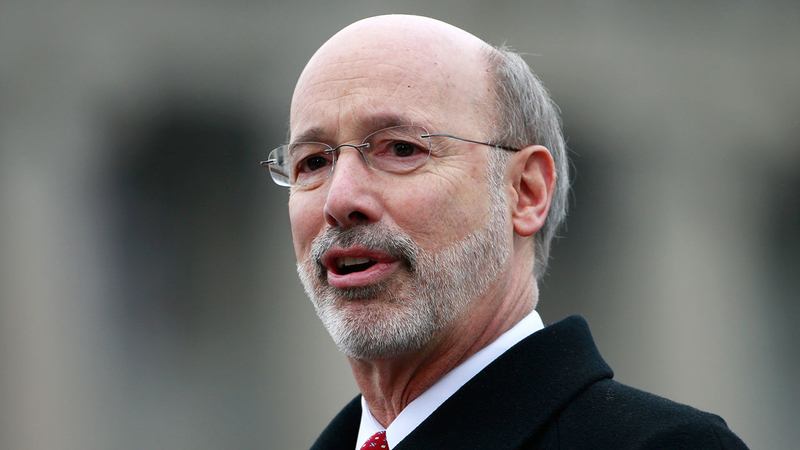 HARRISBURG, Pa. -- Newly elected Gov. Tom Wolf imposed a moratorium on the death penalty in the state on Friday, calling the current system of capital punishment "error prone, expensive and anything but infallible."

The Democrat said the moratorium will remain in effect at least until he receives a report from a legislative commission that has been studying the topic for about four years.

Wolf announced the policy less than a month after taking office, fulfilling a campaign promise.

"I want to give this joint bipartisan commission on the death penalty the ability to come up with their report," Wolf told reporters at a public appearance in Harrisburg on Friday evening. "Is it cost effective? Are we doing the right thing? Is it fair? Is it effective as a deterrent?"

Pennsylvania has executed only three people since the U.S. Supreme Court restored the death penalty in 1976. All three had voluntarily given up their appeals.

Law enforcement groups and Republican lawmakers responded quickly and forcefully with criticism of the move.

The Pennsylvania District Attorneys Association said Wolf had no authority to impose the moratorium and called it a misuse of the concept of a reprieve.

"He has rejected the decisions of juries that wrestled with the facts and the law before unanimously imposing the death penalty, disregarded a long line of decisions made by Pennsylvania and federal judges, ignored the will of the Legislature, and ultimately turned his back on the silenced victims of cold-blooded killers," the association said.

A legal challenge in response was likely, an association spokeswoman said.

The president of the Pennsylvania State Troopers Association called the decision a sad day for the state and noted that Eric Frein, accused in the ambush killing of state police Cpl. Bryon Dickson in the Pocono Mountains last year, would have faced a potential death sentence if convicted.

"Gov. Wolf's decision today is a travesty because it prevents the commonwealth and the family of Cpl. Dickson from securing the penalty that is deserved. This decision also will affect the families of victims from all across the state who have had their loved ones torn from them due to senseless acts of violence from dangerous criminals," said the group's president, Joseph Kovel.

A spokesman for Wolf responded that the governor has sympathy for Dickson's family and keeps in his thoughts the other trooper, Alex Douglass, who was badly wounded that day. Asked about the troopers' criticism, Wolf said what Frein is accused of "is heinous. ... He deserves the worst possible punishment."

Frein has pleaded not guilty and awaits trial.

In a memorandum announcing the policy, Wolf said data suggests that defendants might be more likely to be charged with capital murder and sentenced to death if they are poor or a racial minority and the victim is white.

"If the commonwealth of Pennsylvania is going to take the irrevocable step of executing a human being, its capital sentencing system must be infallible," Wolf wrote. "Pennsylvania's system is riddled with flaws, making it error prone, expensive and anything but infallible."

Wolf said he is granting a temporary reprieve to Terrence Williams, scheduled for execution March 4 for killing two men. Williams admitted killing them while in his teens but now says both men had been sexually abusing him.

Pennsylvania's death row, which has been shrinking, houses 183 men and three women. The most recent execution was Gary Heidnik in 1999, convicted of killing two women he had imprisoned in his Philadelphia home.

The reasons for the state's lack of executions have long been debated in Pennsylvania legal circles. Some have attributed it to death penalty opposition among judges on the 3rd U.S. Circuit Court of Appeals or to aggressive tactics by lawyers who defend people facing execution.

Others say the number of stayed or overturned death sentences demonstrates there are flaws in how those cases are handled, particularly when it comes to providing adequate representation at trial.

The Department of Corrections, as in other states, has had difficulty obtaining the three-drug cocktail it would use for any execution.