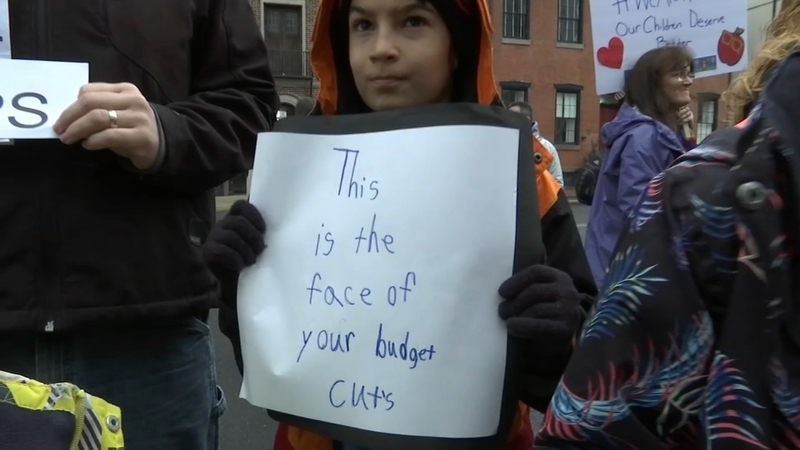 They say the legislation is leaving some school districts with big budget problems.

The students stepped off the buses in Trenton just outside the Governor's office, ready for a first-hand lesson in civic engagement.

Lawmakers called it a modernized funding formula. But many districts, like Toms River in Ocean County, say it's leaving them with massive budget holes for next school year.

"We have a $5.2 million shortfall," said Toms River Schools Superintendent David Healy. "We've already pared down our budget as far as it can go over the last few years. We've already cut 107 staff, 55 assistant coaches."

A concern among many Toms River students and parents? Cuts to extracurriculars.

"If these cuts are going to cut orchestra and band, that will directly affect my children," said Theresa Lindemann of Beachwood, N.J.

All the sports I think definitely need to be kept because I think kids will struggle without them," said student Nicole Platten, a senior from Toms River.

Miles away from the chants and large signs, other districts are also feeling the pinch of the new formula. Including Pitman Public School District.

"We had consolidation of classes in elementary in particular. We have class sizes that are approaching 30 in a class. In a couple of our elementary schools," Dr. Patrick McAleer, Superintendent of Pitman Public Schools.

McAleer says he laid off about a dozen teachers this year because of the state cuts. More layoffs could be coming next year.

"We're looking at a cut of almost 290,000 in state aid next year. That creates a budget hole that we're going to have to fill somehow."

New Jersey Senate President Steve Sweeney is a sponsor of the legislation. In a statement released Tuesday, he said in part:

"The school funding legislation was necessary to bring fairness to school funding that was shortchanging a growing number of school districts around the state. Districts such as Kingsway Regional were being drastically underfunded at the same time districts like Toms River were being vastly overfunded. The current funding formula is correcting those inequities by providing fair funding to those districts that were denied for so long. The issue is not with the current funding formula and therefore we don't have any plans to make changes to it."
Report a correction or typo
Related topics:
educationtrentonbudget
Copyright © 2022 WPVI-TV. All Rights Reserved.
TOP STORIES
AccuWeather: Another Cold Morning
Police investigate 2 deadly hit-and-run crashes in Philly
Car crash sends vehicle into side of home in Lawndale
5 hospitalized after car smashes into utility pole in Montco
CDC warns about counterfeit N95, KN95 masks
Police: Man shot, killed in Philadelphia's East Falls section
All 100 lab monkeys accounted for after several escape crash
Show More
Montco health department ties 10 hepatitis A cases back to restaurant
Arnold Schwarzenegger involved in multi-vehicle crash
NYPD officer killed, suspect is from Allentown
How a 73-year-old grandmother outwitted a scam artist
Community organizers use basketball as a resource to curb violence
More TOP STORIES News