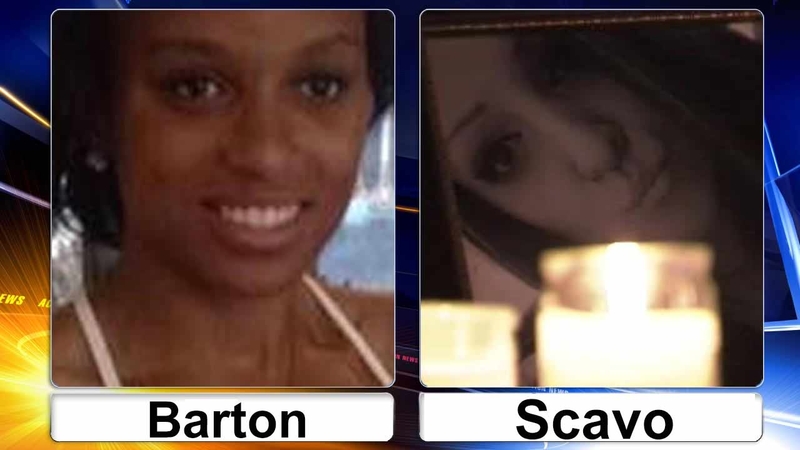 HOLMESBURG (WPVI) -- Three women are dead after a passenger car slammed into a parked tractor trailer causing a massive fire on a Northeast Philadelphia road.

Authorities are now looking into reports that the three victims were possibly very active on social media shortly before the crash occurred.

Police have identified two of the victims as 25-year-old Amonie Nicole Barton of Yeadon, who was driving, and 22-year-old Giavanna Scavo of Northeast Philadelphia.

The identity of the third victim, who was in the back seat, has not yet been released.

The incident occurred around 2:45 a.m. Sunday on the 8100 block of Torresdale Avenue in the city's Holmesburg section.

Authorities say a rented black Chevrolet Camaro occupied by the three women was traveling northbound on Torresdale Avenue at a high rate of speed.

Philadelphia Police Capt. John Wilczynski says, "The speed limit there is 35, and clearly this car was going much in excess of 35, probably at least double that. But speed was the major factor in this crash."

After crossing Rhawn Street, the driver lost control and the vehicle spun and slammed into an unoccupied, parked tractor trailer carrying herbicide.

The impact caused the tractor trailer and the passenger car to burst into flames.

"Me and my girlfriend looked right out the window and we just saw a big pile of black smoke," said witness David Anderson. "We ran right out to see."

Police provide information on the fatal crash on Torresdale Ave.

Authorities tell Action News fuel from the truck ran down Torresdale Avenue where the highway slopes under a freight train bridge; the fuel reached a second parked tractor trailer which also caught on fire.

"Witnesses on the scene said that he could hear people screaming from inside the car and attempted to render aid to them, but he couldn't get to the vehicle due to the flames," said Philadelphia Police Capt. Anthony Ginaldi.

"He was in tears. Heartbroken. He tried to do what he could do," said Anderson. "At that point it was just hard to see that."

Police tell Action News arriving officers and firefighters made several attempts to rescue the three women, but were pushed back by the intense flames.

"There was a couple rescue attempts, that I understand," said Philadelphia Fire Battalion Chief Michael Senski. "They did an excellent job of stopping the spread of the fire and the spill - the fuel spill and the herbicide spill, containing that to Torresdale Avenue."

A hazmat team from the Philadelphia Fire Department responded to the scene to assess the damage due to the fuel spill, as well as contain a pesticide spill from one of the trucks involved. An additional concern is runoff to the Pennypack Creek, which runs near the accident scene.

Sarah Webster came to the scene later in the day after hearing one of her close friends was in the Camaro.

"She was like a sister I always wanted. She was one of my best friends. The only person I ever felt comfortable talking to," said Webster.

Action News spoke to people who live in the neighborhood who say it's not unusual to see people speeding down the street.

"People fly down this road. Nobody drives the speed limit. They're always doing 50, 40 miles an hour down this road, and it's just been a hazard for years and they never do anything about it," said Tim Rentz.

Despite no parking signs, police say the trucks were legally parked at the location - that includes the one truck that contained the herbicide.

Paul Definis with the Upper Holmesburg Civic Association says he's working with the City Council, hoping to ban tractor trailers from parking on the neighborhood street.

"It's constant. People are constantly hitting parked cars here because it's dark along here and they just can't see it," said Definis.

A stretch of Torresdale Avenue was closed Sunday as Hazmat crews cleaned up herbicide and cable company workers restrung lines.

By Sunday evening, a scorched tractor trailer was towed from the scene.

Meanwhile, dozens of the victims' friends gathered for a candlelight vigil.

"She was my best friend," said Ashley Mouhatir, Scavo's sister-in-law.