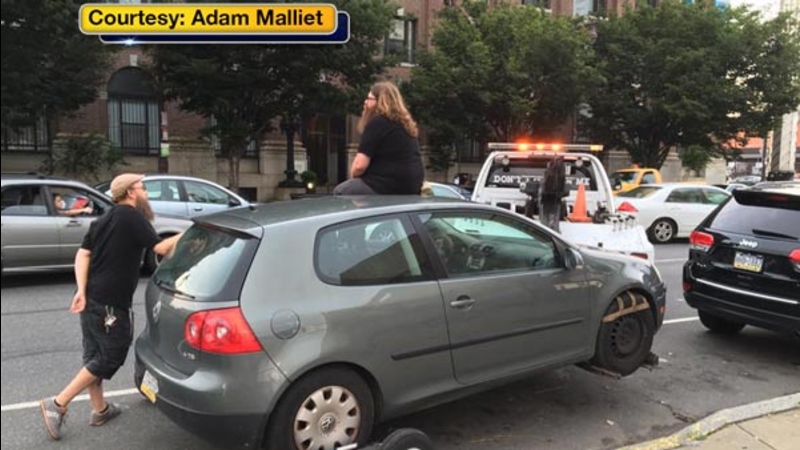 SOUTH PHILADELPHIA (WPVI) -- An alleged tow trap in South Philadelphia involving possible bait trucks and hidden signs is being brought to light by concerned residents, some who have been documenting the towing company's questionable tactics.

"I feel like it was a bait," Katy Otto told Action News Tuesday.

Photos show when Katy Otto parked on South Broad near Alter in South Philadelphia Monday evening, the tow sign had been knocked down - meaning she never saw it.

When she returned hours later, the sign was up and her car was towed.

"There were other cars parked there. There was no sign in the lot - well, it was knocked down as the picture shows. There was no indication that where I was parking was illegal," Otto said. "This just strikes me as very dishonest."

Adam Maillet sent Action News a photo of him trying to stop his car from being towed after parking in the same spot with no signage.

A tow truck company is being accused of running a parking trap in South Philadelphia.

And also on Monday, Chris Norman made a recording of another car being towed.

"He's moving this truck that they parked there, so they can tow the Mercedes," Norman can be heard saying in the video.

Chris Norman made a recording of the towing under fire.

The video was then shared with us on Facebook.

It turned out, this was not the only video Norman had shot. He's been recording the company's movements in this particular location as he was conducting his own amateur investigation.

"Same spot. All day long. The sign lays down. Somebody pulls up and parks, suddenly the sign is back up again. The car gets towed, the sign goes down again and it happens over and over again," Norman said.

We went to George Smith Towing offices, but the man at the window told us he knew nothing about the allegations.

"I'm just a cashier. I don't have anything to do with the towing aspect," the man said.

After leaving our contact information for a manager to return our requests for comment, we learned George Smith Towing is not accredited by the Better Business Bureau, which gave the company an F.

The BBB tells Action News the towing company had four complaints this year and 23 last year - 21 of which went unanswered.

And there's even more grievances on Yelp.

As we spoke to Chris Norman, he noticed the cars behind him were parked along Broad with the sign still up.

"The craziest part is right now the sign's up, there's all these cars parked there, nothing is happening to those cars. But if another car pulls up...suddenly your car gets towed," Norman said.

"I don't have a lot of money; I know other people have even less. I don't think it's right for it to be extorted illegally," Otto said.