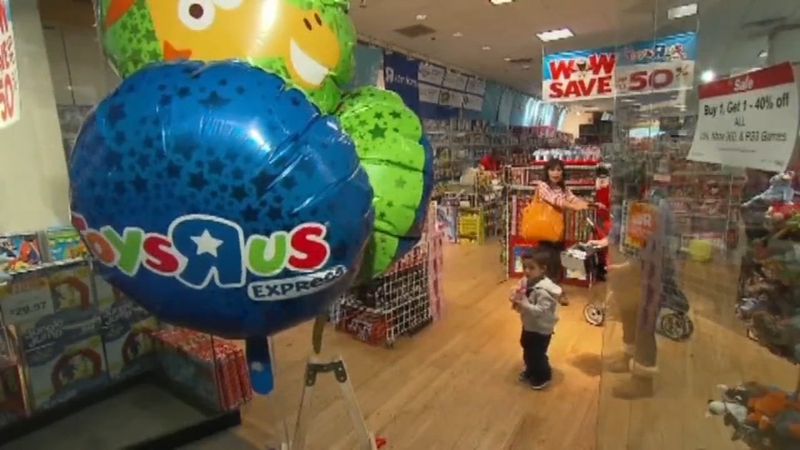 NEW YORK (WPVI) -- For years it was dream factory for kids - and a place where even adults could feel young again, but that dream will now only be a memory.

Toys "R" Us is filing for bankruptcy, and soon will be closing all of its stores. Loyal customers are disappointed to hear about the closure.

"I was shocked because it is such a well-known store, so many toys. "It is like this the ideal store to come to," said customer Miriam Reyes of Port Richmond.

The news of a shutdown, means hundreds of stores will close their doors for good, and some 30,000 employees will soon be out of work. The closure is being blamed on heavy debt and new trends from online shopping - to mobile games.

"I think it is more because people want to order online now, nobody wants to come out shopping anymore. Me, I am not an online person, I'd rather be here to see what I am getting but that's why think a lot of places are going to start closing, like K-Mart," customer Carrie Knerr told Action News.

The company says it worked as hard and as long as it could to stay afloat but, in the end, Toys "R" Us couldn't compete with the changing market - and other retailers like Target, Walmart and Amazon.

Liquidation sales will take place over the next few months, as the company clears the shelves at more than 740 Toys "R" Us and Babies "R" Us stores around the country.

Customers are hoping for some great deals before a final goodbye."I bought some board games for the weekend so I am hoping the deals have not started yet. But hopefully the motorized cars will go on sale soon," said customer Vitin Lacend.

Toys R Us says it will honor gift cards for the next 30 days. Registries will also remain active.

CEO David Brandon said Toys R Us will try to bundle its Canadian business, with about 200 stores, and find a buyer. The company's U.S. online store would still be running for the next couple of weeks in case there's a buyer for it. Workers in the U.S. will get paid for the next 60 days if they show up for work, but after that all benefits and pay will be cut, Brandon told employees at the meeting, according to a recording obtained by the Associated Press. Some workers will be asked to stay longer to help with the liquidation.

It's likely to also liquidate its businesses in Australia, France, Poland, Portugal and Spain, according to the recording. It's already shuttering its business in the United Kingdom. That would leave it with stores in Canada, central Europe and Asia, where it could find buyers for those assets.

A Fung spokesperson did not immediately reply to a request for comment.

When Toys R Us initially announced it was filling for bankruptcy protection last year, the Asian venture said it was not affected and operated as a separate legal entity independent of other Toys R Us businesses around the world.

In Hong Kong, where Toys R Us has 15 stores, parents said there were few other choices in a retail market dominated by a few big players.

"If you want something like a mainstream toy shop, then Toys R Us is the only place you can go," said Ching-yng Choi, whose home and office are both within walking distance of Toys R Us shops.
"Basically either it's Toys R Us or you go to specialized and very expensive toy shops that sell, for example, wooden toys that come from very far away countries like in Europe," she said.

Toys R Us had about 60,000 full-time and part-time employees worldwide last year.

Brandon said on the recording that the company would be filing liquidation papers and there would be a bankruptcy court hearing Thursday.

"We worked as hard and as long as we could to turn over every rock," Brandon told employees.

But in his address, Brandon took shots at shoppers and vendors who cut back on their support for the chain in recent months.

"I believe that all of them will live to regret what is happening to our company," he said.

When the chain filed for Chapter 11 bankruptcy protection last fall, saddled with $5 billion in debt that hurt its attempts to compete as shoppers moved to Amazon and huge chains like Walmart, it pledged to stay open.

But Brandon told employees its sales performance during the holiday season was "devastating," as nervous customers and vendors shied away. That made its lenders more skittish about investing in the company. In January, it announced plans to close about 180 stores over the next couple of months, leaving it with a little more than 700 stores.

The company's troubles have affected toy makers Mattel and Hasbro, which are big suppliers to the chain. But the likely liquidation will have a bigger impact on smaller toy makers that rely more on the chain for sales. Many have been trying to diversify in recent months as they fretted about the chain's survival.

Toys R Us has been hurt by the shift to mobile devices taking up more play time. But steep sales declines over the holidays and thereafter were the deciding factor, said Jim Silver, editor-in-chief of toy review site TTPM.com.

The company didn't do enough to emphasize that it was reorganizing but not going out of business, Silver said. That misperception led customers to its stores because they didn't think they would be able to return gifts.
Now, the $11 billion in sales still happening at Toys R Us each year will disperse to other retailers like Amazon and discounters, analysts say. Other chains, seeing that Toys R Us was vulnerable, got more aggressive. J.C. Penney opened toy sections last fall in all 875 stores. Target and Walmart have been expanding their toy selections. Even Party City is building up its toy offerings.

"Amazon may pick up the dollars, but won't deliver the experience needed for a toy retailer to survive and thrive in today's market," said Marc Rosenberg, a toy marketing executive.

Toys R Us had dominated the toy store business in the 1980s and early 1990s, when it was one of the first of the "category killers"- a store totally devoted to one thing. Its scale gave it leverage with toy sellers and it disrupted general merchandise stores and mom-and-pop shops. Children sang along with commercials about "the biggest toy store there is."

But the company lost ground to discounters like Target and Walmart, and then to Amazon, as even nostalgic parents sought deals elsewhere. GlobalData Retail estimates that nearly 14 percent of toy sales were made online in 2016, more than double the level five years ago. Toys R Us still has hundreds of stores, and analysts estimate it still sells about 20 percent of the toys bought in the United States.

It wasn't able to compete with a growing Amazon: The toy seller said in bankruptcy filings that Amazon's low prices were hard to match. And it said its Babies R Us chain lost customers to the online retailer's convenient subscription service, which let parents receive diapers and baby formula at their doorstep automatically. Toys R Us blamed its "old technology" for not offering its own subscriptions.

But the company's biggest albatross was that it struggled with massive debt since private-equity firms Bain Capital, KKR & Co. and Vornado Realty Trust took it private in a $6.6 billion leveraged buyout in 2005. Weak sales prevented them from taking the company public again. With such debt levels, Toys R Us did not have the financial flexibility to invest in its business. The company closed its flagship store in Manhattan's Times Square, a huge tourist destination that featured its own Ferris wheel, about two years ago.

In filing for bankruptcy protection last fall, Toys R Us pledged to make its stores more interactive. It added demonstrators for the holiday season to show people how toys work, and began opening Play Labs at 42 stores, areas where children can play with different items.