I-295 wall collapse in Bellmawr under investigation; public forum scheduled 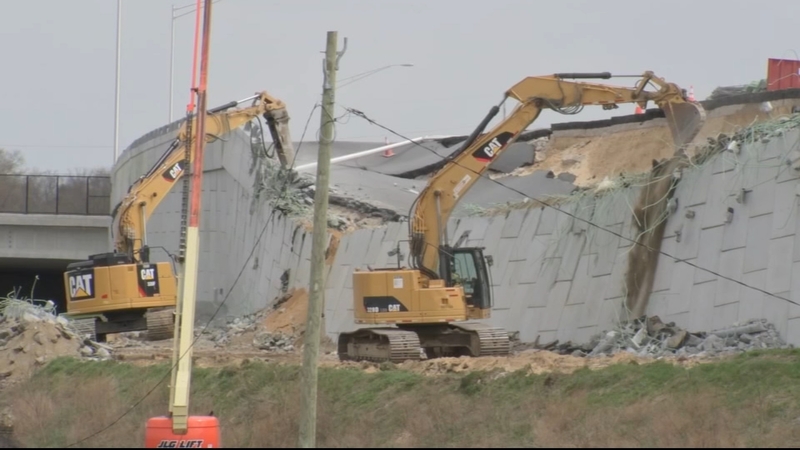 BELLMAWR, New Jersey (WPVI) -- The New Jersey Department of Transportation says an investigation is still underway to find out why a retaining wall collapsed along a stretch of I-295 that is under construction in Bellmawr.

One right lane near the collapse will remain closed until further notice to make more room for construction equipment.

Workers spent Friday taking down the damaged portion of the collapsed retaining wall after reinforcing the existing structure.

Commuters like Nate Linker of Atlantic City drive through this area every day.

"It's pretty much traffic every single day. Every morning," said Linker.

The $900 million project is called "Direct Connection" and aims to improve the junction between 76, 42 and 295.

It was previously estimated to be completed in 2024.

A spokesperson for the New Jersey Department of Transportation confirms even before the wall collapsed last week, the completion date had been pushed back to 2028.

The right lane of Interstate 295 northbound in Bellmawr, New Jersey will remain closed until at least Monday after a retaining wall partially collapsed.

Officials say they don't know yet how much the collapse has set them back.

NJDOT is in the process of investigating what happened with contractors, consultants and in-house staff.

Moen says she accepted, and will participate in a virtual public forum on Wednesday evening via zoom.

"To hear the commissioner was willing to join us in a meeting to really give a full accounting to the public was something that I was encouraged by," said Moen.

Residents who wish to participate can request a link by emailing district5@njleg.org.

Drivers hope officials will be forthcoming with answers.

"Somebody missed something. I don't know much about it but I don't imagine that was supposed to happen," said Lou Gallinaro of Washington Township, N.J.

The contract for this portion of the project was awarded to South State Inc. based in Bridgeton, NJ.