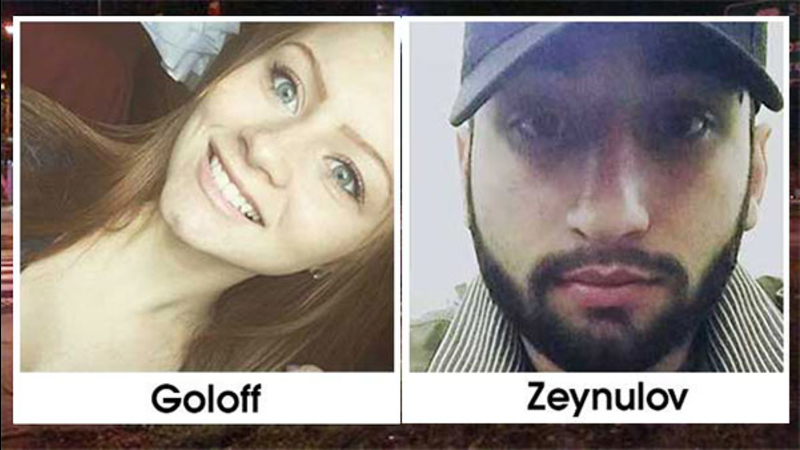 FELTONVILLE (WPVI) -- Police say the driver of a car was rushing to the hospital to see his father when he ran a red light on the Roosevelt Boulevard, causing a crash that left his two friends dead.

According to investigators, the father of the 18-year-old driver had been robbed and assaulted while making a food delivery about 45 minutes before the wreck.

Those killed were identified as 16-year-old Maggie Lynn Goloff of the 800 block of Cottman Avenue, and 19-year-old Osman Zeynulov of the 400 block of Renard Street.

"He's my best friend actually, we worked together, too. He's a really hard worker. He just got back to school trying to get an education," said friend Hassan Yaghnam.

"Maggie was just Maggie. I mean when she came in, she brighten the room. I mean she was an awesome girl, an awesome little girl," said friend Danny O'Conner.

The driver has been identified as Ahmed Shahin.

Police say he was driving his Hyundai Sonata southbound on the Boulevard around 12:30 a.m. Friday when he ran the light and was struck by a Ford Explorer being driven westbound on Front Street.


The front-end of the Ford hit the driver's side of the Hyundai, causing the passenger's side to crash into a light pole.

"We know the female was sitting in the front seat when medics found her. It appears that where she was sitting was where the vehicle hit the light pole," said Chief Inspector Scott Small.

The Rev. Emile Stanton was traveling behind the teen's car, saying they also ran the light at Rising Sun.

"The red car ran the light. He ran Rising Sun light, and then he ran Front street light and he hit the lady at this light," said Stanton.

Sterling Scott heard the crash and rushed from his home, where a small group had already gathered. He says Shahin was trying to climb through the window.

"There's two people trapped in the back of the vehicle, and both sides were crushed. There's no way they could get out," he said.

The SUV came up the embankment and rolled down the hill to a stop.

"She was screaming 'They hit me, they hit me!' I said 'you've got to calm down, that will be dealt with later on,'" said Scott.

And friends say the fact that the two people who were riding in the back seat are the ones ended up being killed is difficult to understand.

"He's a really good person, and he got a good heart, and his parents raised him right. That's the best person you could find, he's one in a million," said Yaghnam.

"And he used to, he used to be a very lovely person, like he's honest and everything," said friend Leo Hamwai..

Police are looking for surveillance video and are interviewing both drivers as this investigation continues.

As for the robbery of Shahin's father, police say he was held up in the 1900 block of Bristol Street around 11:45 p.m. Thursday while making a food delivery. He was flagged down by two men who claimed to have ordered the food.

One of the men had a gun and there was a struggle, police say, and the victim was struck repeatedly in the head. The suspects fled after seeing a marked police car drive by.

The descriptions released by police are: