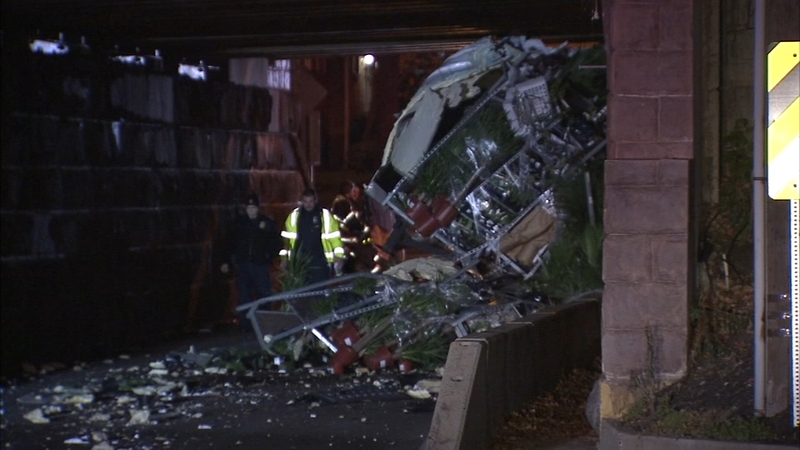 RADNOR TWP., Pa. (WPVI) -- A tractor-trailer struck an overpass in Radnor Township near a SEPTA train station, resulting in the shutdown of a major roadway during the morning rush.

The truck hit the overpass on King of Prussia Road around 1 a.m. Thursday and the trailer detached.

The driver continued to drive the cab of the tractor for approximately three miles, creating a fiery scene on Lancaster Avenue and Airdale Road.
EMBED More News Videos

Watch video from the Action Cam after a tractor-trailer crashed into an overpass in Radnor, Pa.

King of Prussia Road was closed between Matsonford and Radnor Chester roads by the Paoli-Thorndale Line at the Radnor SEPTA station.

It reopened just before 8 a.m.

King of Prussia Rd in the area of Radnor Station is closed due to a tractor trailer that struck the bridge & ripped off the trailer! @6abc pic.twitter.com/tGQNcCPJ0b

Due to the accident, SEPTA suspended the Paoli-Thorndale Line for a short time early Thursday morning. Around 4:45 a.m., SEPTA announced service had resumed.

The tractor-trailer, which appeared to be carrying plants, left debris all over the roadway.

Action News is told it appeared the driver of the tractor-trailer was traveling at a high rate of speed when the truck hit the bridge overpass.

The overpass is marked with a 10 foot limit.