'We could have died': Passengers escape bus fire on New Jersey Turnpike 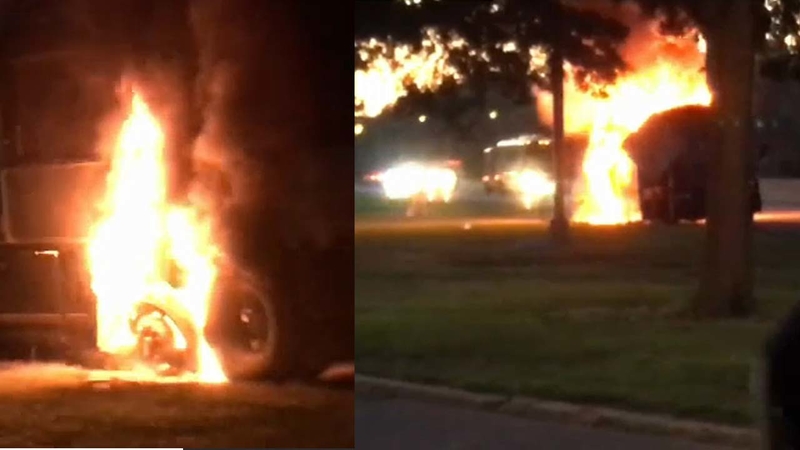 It happened at 5:15 a.m. Friday in the southbound lanes in Carneys Point Township approaching the Delaware Memorial Bridge.

Everyone survived, though passengers say at least one person was injured when trying to get off the bus.

They described the chaos and the panic when the bus caught fire - how the driver yelled, "Leave everything and get off the bus!"

This greyhound bus is now a charred shell.

Passengers' cellphone videos show the flames and the black smoke billowing into the air.

Fifty passengers plus the driver were on board when bus, which was traveling from New York to Washington, D.C., caught fire.

Passengers say it started in the back.

"I just heard somebody scream, 'Flames!' And everybody started screaming," said passenger Karlissa Jackson from Boston, Mass.. "People were trampling over each other, people were climbing over the seats."

"I hear, 'Pop! Pop!' I thought somebody flipped and started shooting in the back," said Glendora Riley from Brooklyn, N.Y. "And I thought, 'My God, there's children in the back!'"

Everyone got out of the bus.

For hours they congregated on the curb of the rest stop near the wreckage.

Some luggage was salvaged, but for many, their cash, laptops, medicine, baby formula, were burned and gone.

Passengers say the bus driver tried to help, but there was only so much he could do.

For four hours they waited for the replacement bus, which eventually left shortly after 9:30 a.m.

Some borrowed money from strangers for food. There was no formula at the rest stop for one passenger's 5-month-old baby.

"Greyhound should treat us like the airlines treat people and give them a really good compensation," said Freda Henderson from New York City. "But I heard we were going to have to fight for the compensation."

The company also said the replacement bus came from Baltimore. It took time to secure a driver, which is why it took fours hour for that bus to arrive in New Jersey.

There was another fire on a greyhound bus, which happened coincidently around the same area last August.

No word on what caused this one.