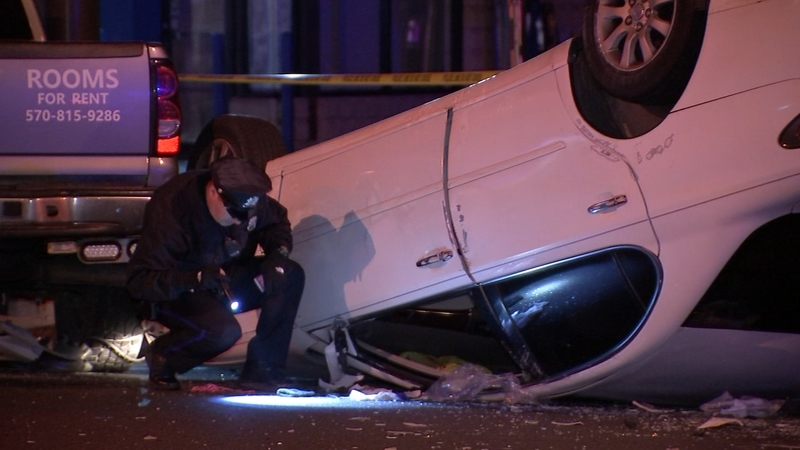 PHILADELPHIA (WPVI) -- A woman went into premature labor following a crash involving a DUI suspect in the Overbrook section of Philadelphia. The newborn remains hospitalized in critical condition.

The crash occurred around 2:40 a.m. Tuesday at the intersection of Haverford and Overbook avenues.

Haverford Ave and Overbrook Ave are closed following a crash in the Overbrook section of Philadelphia. More on @6abc this morning pic.twitter.com/0Y1PWSNHb2

Police say a man and a pregnant woman in a 2006 Chevrolet pickup truck were stopped at a traffic light when they were rear-ended by the driver of 2003 white Lexus.

Surveillance video shows the truck drive through the intersection. That's when the car hits the truck and flips over.

Arriving medics took the man and woman to Lankenau Medical Center where the woman gave birth. The baby is listed in critical condition. Action News is told the baby was due in May.

The 42-year-old mother and 36-year-old man are in stable condition.

The 56-year-old Lexus driver was arrested for DUI and driving with a suspended license.

Many in the area say they wouldn't be surprised if speed is a factor.

"It's a racetrack, it's becoming a racetrack from this area here to down the street," said Bobby Mulholland.

Overbrook and Haverford avenues were closed for over three hours as crews worked to remove the upside down Lexus.