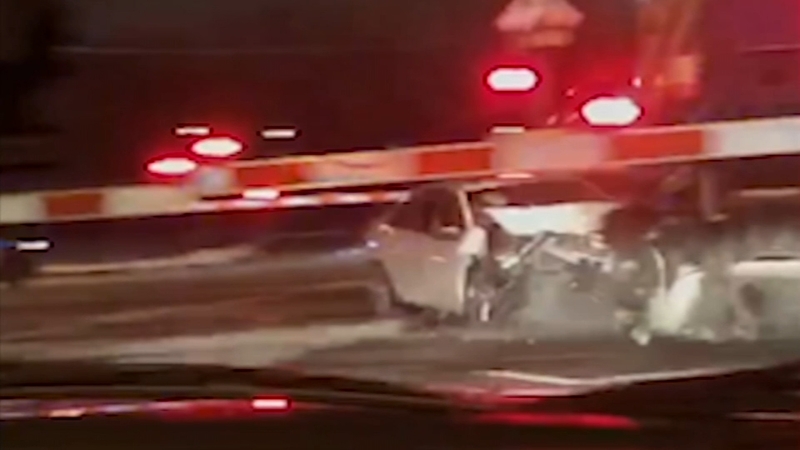 LOMBARD, Ill. -- A train crashed into a car on the tracks in Illinois just seconds after the elderly driver was rescued by two good Samaritans and a police officer.

A Metra train crashed into a car on the tracks just seconds after the elderly driver was rescued.

At about 8:30 p.m. Monday, the driver, 96-year-old Antoinette Lazzara, was stuck on the tracks at the railroad crossing at Grace and St. Charles Road in Lombard. She was apparently disoriented and had trouble getting out of the car as the train approached.

"I saw the wheels turning, saw that the vehicle was stuck and was not able to move," said Lombard Police Officer Dan Herrera.

Herrera, along with 19-year-old Steve Spapperi and 24-year-old Justin Mueller, jumped out of their cars and ran to help get her out of the way.

Spapperi and Mueller, both of Lombard, saw Lazzara lose control and drive onto the tracks.

"We started pulling her out of the car, and that's when you see the train lights turning the corner and we were like, 'Yeah, we gotta get out of here,'" Spapperi said.

Two men and a Lombard cop rescued a 96-year-old woman whose car was stuck on the tracks as a Metra train approached.

Less than 10 seconds after the 96-year-old woman was rescued, the train crashed into her car.

"We started walking her out and realized, with her cane and everything, she couldn't walk on the rocks and stuff. We ended up having to carry her off," Mueller said.

Chris Diaz, who was a passenger in Spapperi's car, captured the crash on cellphone video which shows Lazzara's white 2006 Lincoln Zephyr being pushed more than 50 feet by the westbound Metra train.

"I do believe. I was even praying on my way coming home from work, I do believe that God put us there right in time," said Mueller.

Lazzara was taken to a hospital where she was under observation Tuesday evening. She was not injured in the incident.

Just 12 hours before the incident, Lazzara had been reported missing from her home.

"It's nice to know that we still have people that act when others are in need. I truly believe that they helped save a life this day. These are both Lombard residents and I'm very proud of our town. Lombard is a community that cares about its neighbors and that's evident with this situation."

Police are working to reconstruct the incident to determine how the vehicle became stuck on the tracks.