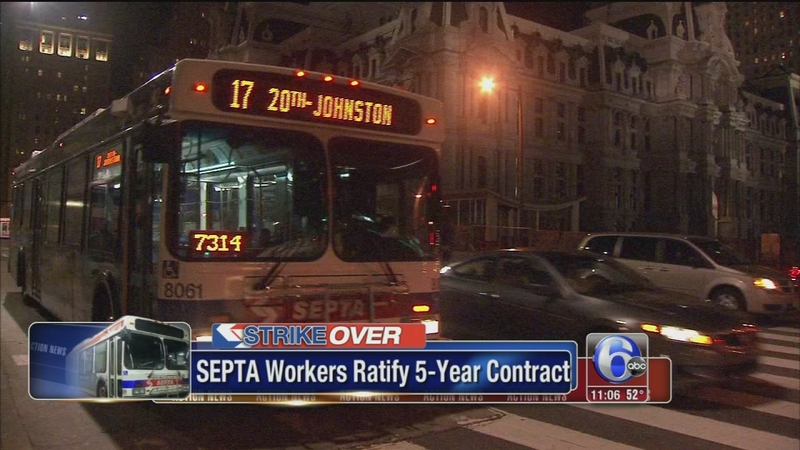 The terms were negotiated during the six-day strike at the beginning of the month.

TWU Local 234's nearly 5,000 workers will get pay and pension increases, but will have to contribute more to health care.

In an open letter to members of TWU Local 234, the union's president, Willie Brown, says he is proud of the negotiated contract and reiterated if SEPTA had money, the two sides would still be negotiating.

But, he says, SEPTA just does not have available funds.

Brown also says he knows some members feel they should have gotten more. He urged workers to ignore false information from those opposed to the deal.

Earlier in the day, Action News spoke to workers who said they felt the contract would be approved.

"I've been here twenty-something years, and it's better than what we had," said Roscoe Brown.

"Basically, it's the best we're going to get. It doesn't make any sense, in my opinion, for us to go back out," said George Richardson.

The six-day strike ended just in time for Election Day after tense talks.

Just before the settlement was reached, both SEPTA and the City of Philadelphia filed for a back-to-work injunction that would have forced workers back on the job.

The agreement was reached before a court ruled on the injunction requests.

Brown's letter provides an outline of the tentative contract workers voted on.

The five-year deal includes wage increases of 10.5 percent, pension increases of up to 15.2 percent and employee contributions to a "Cadillac"-level health care plan.