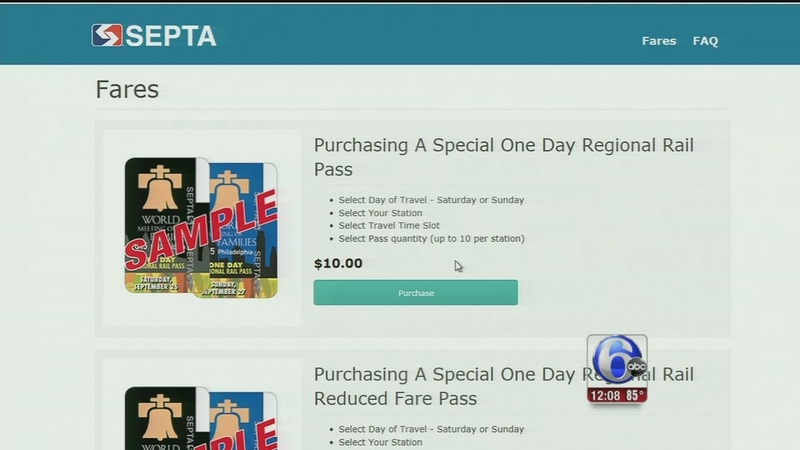 PHILADELPHIA (WPVI) -- SEPTA is expected to announce its plan for resuming online sales of Regional Rail passes for the pope's visit in September.

The transit agency hasn't said when ticket sales would resume.

The agency announced on Twitter that its site was "temporarily closed while (we) resolve problems," problems caused by unexpectedly high traffic volume.

RRD: The Papal E-Commerce site is temporarily closed while resolve problems. We apologize/will update when more info. is available

SEPTA officials told Action News they brought in outside contractors to help with the process, and their site was tested for 1,700 hits per second.

They believe the site was receiving three times that amount of traffic on Monday morning after tickets went on sale at 9 a.m.

Only 201 tickets were sold on Monday morning. SEPTA confirms that most transactions were not completed.

Users began reporting problems shortly after the passes were to go on sale.

@SEPTA_SOCIAL https://t.co/39kyGzO3dC continues to time out -- will not allow purchase to go to cart

@SEPTA_SOCIAL What's up? I had tickets for Sunday and then got knocked off the site!

"They were confused, they were frustrated. They were afraid that maybe it was already sold out," said Kim Heinle of SEPTA.

Meanwhile, Special Freedom cards are available at PATCO's Broadway station and online. Passengers who do not have them will not be permitted on the trains on Sept. 26 and 27.

Passengers may use their regular Freedom cards during the pope's visit and pay $2.50 for each ride.

The deadline for PATCO's online purchases is Sept 1.