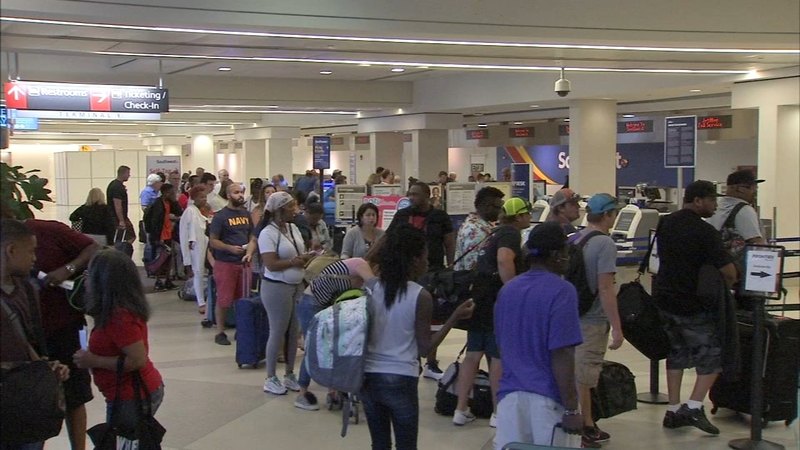 Line stretches from security around corner at terminals D/E. Travelers at PHL hoping they can take off in another day of heavy rain. pic.twitter.com/8C1Et3LieH

The line started at security and from there it stretched, extending all the way down the hall toward terminal E, rounding the corner at the airport.

It didn't look much better downstairs at check-in.

This is what the security line looks like right now at Terminal D/E at PHL. Travelers hoping their flights take off today despite rainy forecast. pic.twitter.com/krUg6JTi2y

"We're trying to figure out what happened. There were delays downstairs and huge lines," traveler Michalina Goral said.

Summer is already busy for travel, and on Tuesday, passengers were also faced with weather-related delays and cancellations, some were forced to reschedule for Wednesday. And with more storms, that prospect wasn't completely reassuring.

Action News viewer Kelly Master landed at the airport around midnight Wednesday. She said she sat on the runway waiting for backlogged planes to take off before her plane could taxi to the gate. Master said it was chaotic but the police were there to manage the situation.

Luggage was lined up in baggage claim with no owner in sight.

Even as it got later - 1 a.m., 2 a.m. - it was still crowded inside the airport as travelers landed from their delayed flights.

"I understand it was all due to weather- so what are you going to do?" Pete Lipsi of Lansdale, Pa. said.

"It seemed that all up and down the eastern coast corridor you had rain delays," traveler Maurice Haltie of Philadelphia said.

Passengers are hoping for a better day despite the rainy forecast.

Huge security line this AM at PHL. Was also busy overnight as lots of delayed flights arrived. pic.twitter.com/AMhZgeBuWn