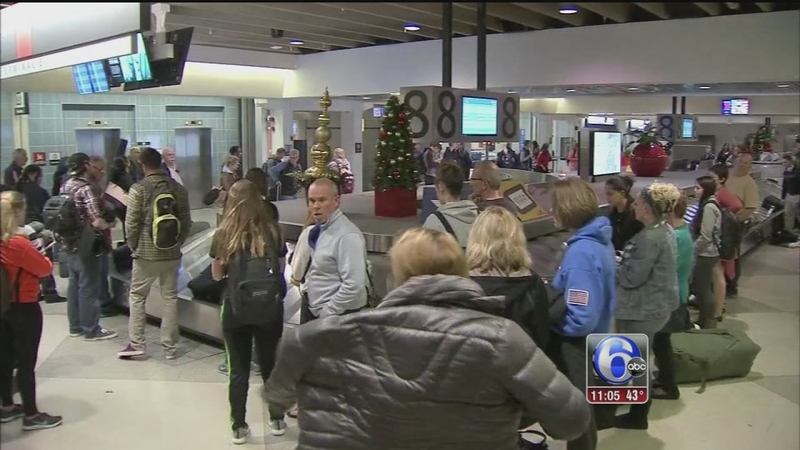 PHILADELPHIA (WPVI) -- It's was a busy day and night at Philadelphia International Airport Sunday as travelers made their way home after visiting with family for the holiday.

AAA says 3.6 million Americans were expected to fly to their destinations this Thanksgiving weekend.

Action News caught up with holiday travelers making their way home in the air, and on the roads.

"When you're in stand-still traffic, and pumping the brakes, oh that makes a long ride just horrible!" said Thelma Epps Johnson of Lauderdale Lakes, Florida.

Johnson tells Action News she is tired after a long day of driving her daughter and grandkids home to Glenside, Pennsylvania, after spending Thanksgiving in Disney World.

They hit the road in South Carolina around 9 a.m., and stopped at the Pennsylvania Welcome Center on I-95 in Boothwyn to rest.

"Today traveling was really hectic. It was a lot of traffic jams, but we weathered it," said Johnson.

According to AAA, almost 42 million people were expected to take a road trip this holiday weekend, and because gas prices are the lowest we've seen on Thanksgiving since 2008, the number of drivers is up from last year.

The Little family from Berwick, Pennsylvania, spent Thanksgiving in Virginia Beach, and were pleasantly surprised with a smooth ride home.

"If you listen to the GPS it's going to tell you that there's traffic everywhere, but we keep sailing through it," said John Little. "I haven't veered off our regular path."

At Philadelphia International Airport, plenty of travelers packed the baggage claim area, many of them relieved that their trip was so easy.

"This year has been incredibly easy. Not sure why, but it has been," said Alana Murphy of Rittenhouse Square.

"It was actually busier. We left on Thursday, and it seemed a little busier today than it was on Thursday, Thanksgiving Day, but everything was pretty smooth," said Jacqueline Boccher of Hillsboro, New Jersey.

The Wilson's, who were trying to get home to Connecticut, didn't fare as well.

"A little frustrated, a little tired, a little ready to be home," said Shelley Wilson of Westbrook, Connecticut.

The Wilson's tell Action News they missed their connecting flight to New Haven, Connecticut, because of a delayed flight in Norfolk, Virginia. So their Outer Banks Thanksgiving trip isn't over, yet.

"Now we're going to hopefully be able to get our bags, either spend the night or get a rental car and drive home," said Craig Wilson of Westbrook, Connecticut.