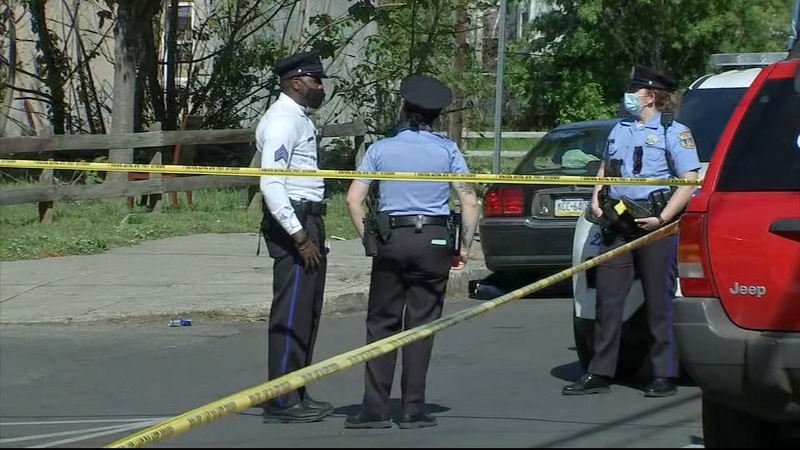 The shooting happened Saturday around 3 p.m. on the 2100 block of West Dauphin Street.

"I was in the house, and I heard boom, boom, boom," said Mark Clark, from North Philadelphia.

Surveillance video showed what appeared to be the white getaway car police said they have been looking for.

Officials say four people were spotted getting out of a vehicle. One person had a gun in hand.

About a minute later video showed one person get in the driver's seat and turn the corner.

About another minute went by, and people gathered around the scene. The video showed someone putting their hands over their head.

"I was sitting in bed, and I heard some loud noise," said James Jackson, from North Philadelphia.

Clark added, "I heard the gunfight going on, and I, unfortunately, I just prayed to God it wasn't nobody I know."

Police immediately arrived, carrying one of the men to a cruiser.

Officials say the three men shot are believed to be in their twenties.

One, was shot in the head, the other in the chest and back, and the third in the stomach.

Residents say they're fed up with the gunfire in the area.

"I knew it was coming sooner or later because they be hanging out here on the corners," said Clark.

Residents pointed out old bullet holes at homes on the block and an old memorial on a stoop where Saturday's shooting took place.

"I don't know why there are so many shootings. It's just crazy," said Jackson. "I don't see no ending to it."

When Action News asked police if they were shocked the shooting happened in broad daylight, they responded, "Not anymore, no, unfortunately," said captain Fred McQuiggan, with Philadelphia police.