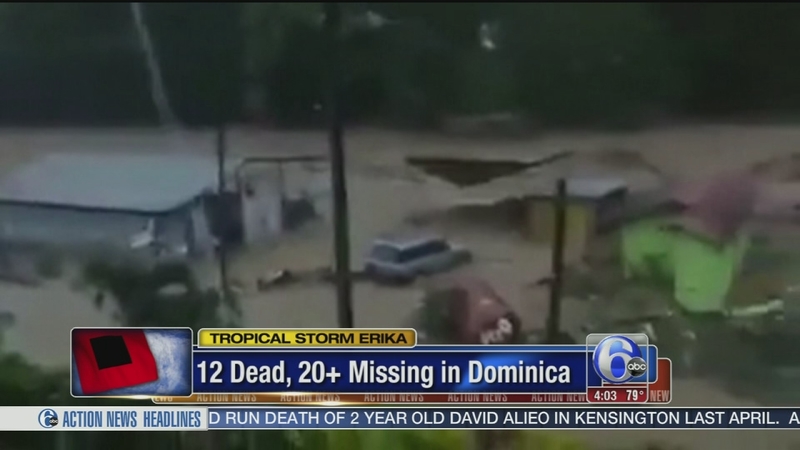 SANTO DOMINGO, Dominican Republic -- Heavy rain and strong winds from Tropical Storm Erika began to bear down Friday on the Dominican Republic as authorities on the eastern Caribbean island of Dominica warned that the death toll would rise from mudslides and flooding unleashed by the system.

Authorities in Dominica had said at least four people were killed and about 20 were missing after Erika drenched the land and caused rivers to surge on the mountainous island.

But additional bodies have been recovered in the hard-hit southeast of the island, Police Chief Daniel Carbon said, declining to provide specifics. He predicted it would be another 24 hours at least before an official count would be released.

"There are additional bodies recovered but it is an ongoing operation," Carbon said. "It will take us a couple of days to recover as many bodies as we can. So the count will increase."

Erika is a particularly wet storm, and was expected to dump up to 8 inches (20 centimeters) of rain across the drought-stricken northern Caribbean as it headed toward the Turks and Caicos Islands, the Bahamas and the U.S.

Forecasters no longer expected it would strike Florida as a hurricane but still considered it likely that it would reach the state as a tropical storm starting late Sunday, said Chris Landsea, a meteorologist with the U.S. National Hurricane Center in Miami. It was also considered possible that the storm would dissipate as it passes over the mountains of Hispaniola, the island that includes the Dominican Republic and Haiti.

"It is unlikely at this point to become a hurricane," Landsea said. "The main threat will be rainfall. You've seen some horrific rainfall in the Caribbean with what happened in Dominica."

Erika was located about 60 miles (95 kilometers) south-southeast of Santo Domingo, Dominican Republic, and was moving west near 18 mph (30 kph), according to the U.S. National Hurricane Center in Miami. The storm's maximum sustained winds were near 50 mph (85 kph).

Erika was expected to affect the popular tourist areas of Punta Cana, Samana and Puerto Plata, as well as the capital of Santo Domingo.

Geovanny Batista cleared garbage from a ditch next to his house in an impoverished community in the capital while his wife bought food for the family. The couple and their three children planned to take shelter under their corrugated zinc roof home.

"This is what we poor people can do," he said of the storm preparations.

Erika previously slid to the south of Puerto Rico, knocking out power to more than 200,000 people but causing no major damage or injuries.

Dominica, meanwhile, was struggling in the aftermath. Assistant Police Superintendent Claude Weekes said authorities still haven't been able to access many areas in the mountainous island because of impassable roads and bridges. "The aftermath is loads of damage," he said. "It really has been devastating."

Dominica Prime Minister Roosevelt Skerrit urged people throughout the country to help clear streets strewn with mud and toppled trees following the storm's passage. Authorities were still assessing damage and were unable to reach some areas in the island's southeast. Skerrit said they were airlifting injured people to the hospital in Roseau.

Erika caused rivers to overflow and roads and bridges to collapse on Dominica. An elderly blind man and two children were killed when a mudslide engulfed their home in the southeast. Another man was found dead in the capital following a mudslide at his home.

People on the island told of narrowly escaping being engulfed by water as Erika downed trees and power lines as it unleashed heavy floods that swept cars down streets and ripped scaffolding off some buildings.

"I was preparing to go to work when all of a sudden I heard this loud noise and saw the place flooded with water," said Shanie James, a 30-year-old mother who works at a bakery. "We had to run for survival."

Mudslides destroyed dozens of homes across Dominica, including that of 46-year-old security guard Peter Julian, who had joined friends after leaving work.

"When I returned, I saw that my house that I have lived in for over 20 years was gone," he said. "I am blessed to be alive. God was not ready for me ... I have lost everything and now have to start all over again."

Meanwhile in the Pacific, Ignacio strengthened into a hurricane. The storm's maximum sustained winds increased Thursday morning to 90 mph (150 kph).

Hurricane Ignacio was centered about 840 miles (1,350 kilometers) east-southeast of Hilo, Hawaii, and was moving west-northwest near 10 mph (17 kph).

Also in the Pacific, Jimena strengthened to a hurricane Friday morning with maximum sustained winds near 90 mph (150 kph). Jimena was centered about 1,075 miles (1,730 kilometers) southwest of the southern tip of Mexico's Baja California peninsula.