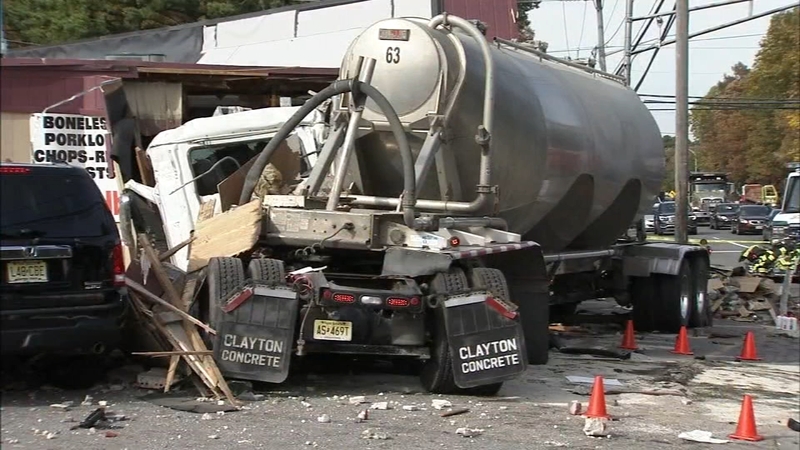 It happened at Glory's Market in Jackson Township.

A truck heading southbound on Cedar Swamp Road (Route 527) collided with a car heading in the opposite direction and slammed into the portion of the store where the cashier works.

"We were working in the office, and all I heard was a loud sound and the deli cases crashed the wall into the office," said Carla Glory.

Chopper 6 was over the scene to find the corner of the store demolished, with the truck at rest in the debris.

Tractor-trailer partially plows through New Jersey market. Chopper 6 was live over the scene on November 1, 2018.

Glory said she immediately realized one of her employees was buried under the debris. People immediately went to work.

"People stopped, came from everywhere," she said. "It was amazing."

That employee was seriously injured, as was a customer of the store.

Semi that rammed Glory’s Market in Jackson twp Ocean County NJ today is hauled away. 4 people transported to local hospitals. A customer in the store said to be in critical condition, an employee said to be in very serious condition. pic.twitter.com/xOVFM39hH2

According to Glory, the employee at the cash register knew what was about to happen.

"What I'm told by the employees is she yelled 'run.' She screamed, she saw it coming," Glory said.

Glory said the employee who was injured normally works at the deli counter in another part of the building, but took over the cash register because the cashier needed a break.