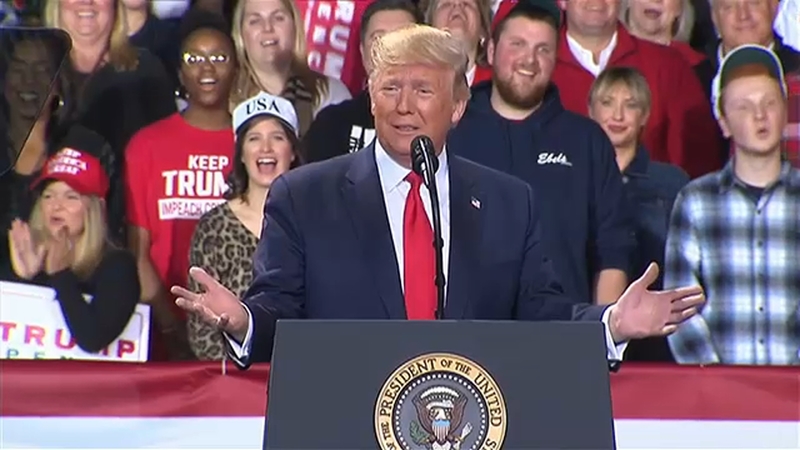 SWEDESBORO, New Jersey (WPVI) -- President Donald Trump was impeached by the U.S. House of Representatives Wednesday night, becoming only the third American chief executive to be formally charged under the Constitution's ultimate remedy for high crimes and misdemeanors.

Residents across the Delaware Valley had mixed opinions about the historical vote.

Inside the Swedesboro Diner, Action News did not meet anyone who supported impeachment. If they did they didn't want to talk about it.

Cherylana Siele said, "I think it's ridiculous. I think with hunger, poverty, welfare, no insurance-- those are the real issues of this country. But they're spending money focusing on the president since the day he took office."

Fred Pratta said, "I think this is great because Trumpy will win in a landslide next year."

He voted against the two articles of impeachment that have been adopted. He's also in discussions to leave the Democratic Party.

Van Drew's constituents agreed with those no votes.

But it depended on where you were.

We drove to Collingdale in Delaware County. At the Wawa, we found nothing but impeachment supporters.

Theresa Traore said, "He hasn't done anything to defend himself. If you don't think it was fair, why didn't you bring yourself there and testify or at least let some of your cronies testify?"

Barbra Workman said, "I hope as this goes forward, the Senate has to understand this has to happen."

Mary Stelly said, "This man does not care about anyone but himself."

Then it was up to Plymouth Meeting at the mall. Despite the extreme cold, the topic of impeachment was still worth it for neighbors to stop and talk.

Eileen Jackson said, "I think he should be impeached. I think he's been crooked and underhanded ever since he's been in office."

The articles of impeachment, the political equivalent of an indictment, now go to the Senate for trial. If Trump is acquitted by the Republican-led chamber, as expected, he would have to run for reelection carrying the enduring mark of impeachment on his purposely disruptive presidency.

The trial is expected to begin in January in the Senate, where a vote of two-thirds is necessary for conviction. While Democrats had the majority in the House to impeach Trump, Republicans control the Senate and few if any are expected to diverge from plans to acquit the president ahead of early state election-year primary voting.
Report a correction or typo
Related topics:
politicsnew jerseydelawareimpeachmentdonald trumppolitics
Copyright © 2022 WPVI-TV. All Rights Reserved.
TOP STORIES
Visitors fill the Jersey Shore for Memorial Day weekend
Police: Triple shooting leaves 1 dead in West Oak Lane
One man dead after West Philadelphia shooting
AccuWeather: Sunny & Pleasant Sunday
'Is it worth my kid?' Parents of TX school shooting victim speak out
Officials ID 5 killed in Pottstown explosion; most were children
Official admits police made 'wrong decision' in TX shooting
Show More
Victim of elementary school attack says it could have been prevented
North Philly store owner robbed, assaulted with brick: Police
Dann Cuellar retires after 34 years at Action News
Another Trenton, NJ firehouse hit by gunfire
Rainy start to Memorial Day weekend at the Jersey Shore
More TOP STORIES News