'Stand with Ukraine' rally held on Independence Mall in Philadelphia 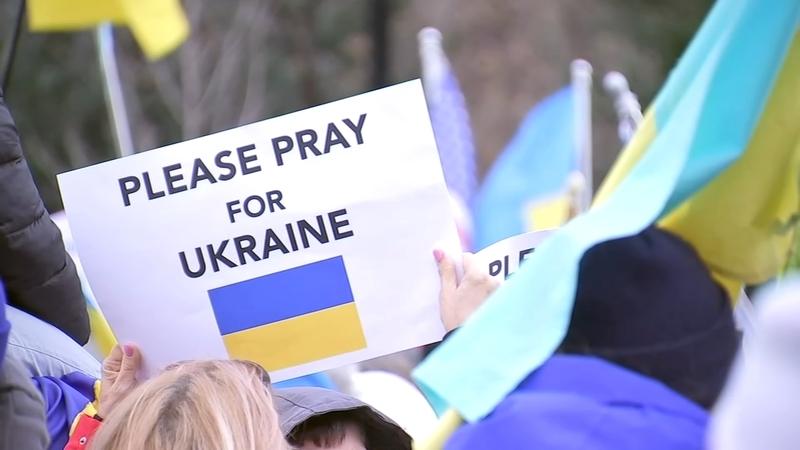 PHILADELPHIA (WPVI) -- More than 100 people gathered at Independence Mall on Sunday for a rally to show support for Ukraine.

Attendees say the location itself is symbolic.

"This is really important to me to make sure people know about this, (that) people don't forget about it because it's already starting to fade from people's minds," said Yuliya Khromyak, who lives in Spring Garden.

She moved to the United States from Ukraine when she was 10 years old. She still has family back home. For over a month, she says she has been refreshing her phone every morning, praying her loved ones are okay.

She says rallies like this, signs of unity with Ukraine, are important to her.

SEE ALSO: Biden delivers message to Ukraine amid war with Russia: 'We stand with you. Period.'
EMBED More News Videos

President Joe Biden said Saturday that Vladimir Putin "cannot remain in power," dramatically escalating the rhetoric against the Russian leader after his brutal invasion of Ukraine.

One of the speakers was Sergiy Kyslytsya, the Ambassador of Ukraine to the United Nations.

"There are cities where there is basically no population left," Kyslytsya told Action News.

The Ambassador was at the Kimmel Center earlier Sunday for a Stand with Ukraine concert featuring the Philadelphia Orchestra. He believes there is only one way this war will end.

"I can assure you that we will not surrender, and unfortunately this bloodshed will continue as long as one person, one person, President Putin does not change his mind," he said.

Others at the Independence Mall rally called on the United States government to step up in efforts for Ukraine.

"I want our president to know he needs to wake up and close that air space and protect people," said Dominic Lattanzi from Bensalem.