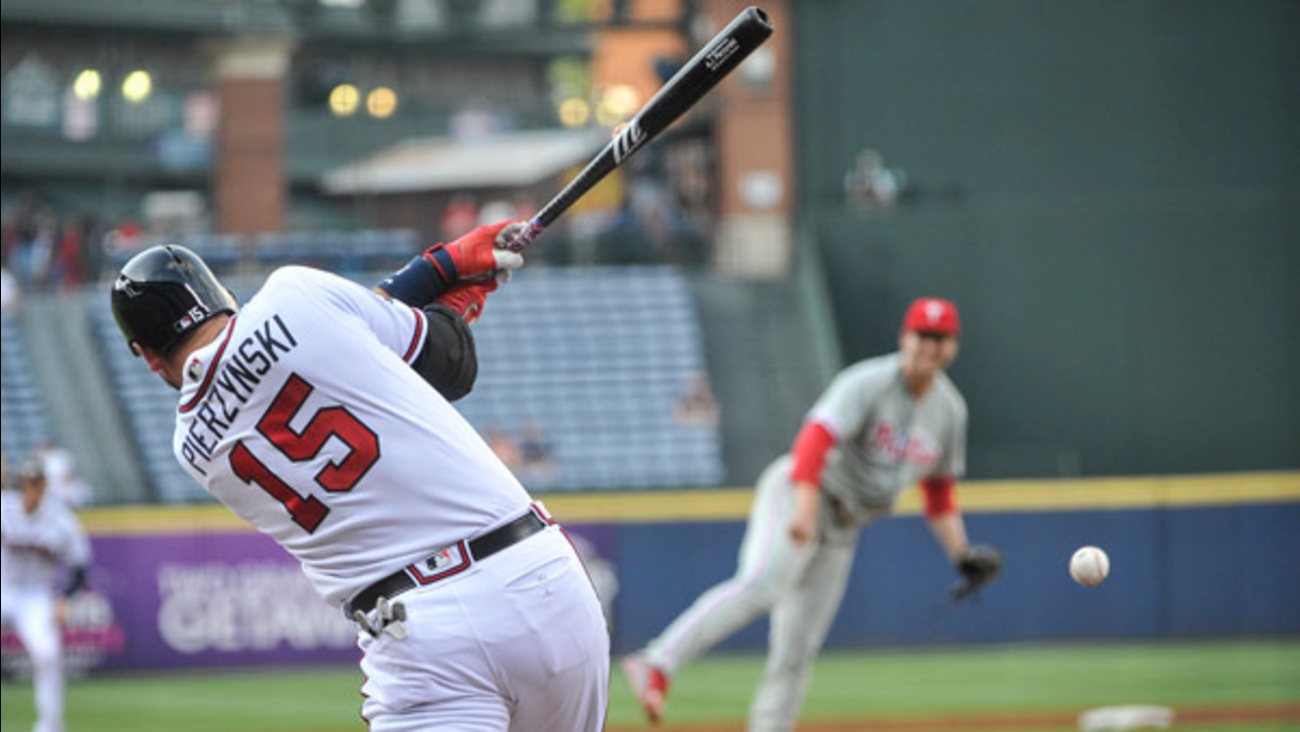 ATLANTA -- Jerad Eickhoff's poor command left him at an especially big disadvantage against an opponent who rarely missed his target.

Eickhoff was knocked out in the fifth inning while losing his fourth consecutive decision as the Philadelphia Phillies fell to Williams Perez and the Atlanta Braves 5-1 on Wednesday night.

Perez, recalled from Triple-A Gwinnett before the game, allowed only two hits and one run in eight innings. He did not walk a batter and had only one three-ball count.

"Eickhoff didn't have command of anything," said Phillies manager Pete Mackanin. "He threw some good curveballs but he hung a lot of them."

Eickhoff left the game after giving up a fifth-inning homer to Freddie Freeman.

"I think it just boils down to the command of his fastball," Mackanin said. "His last outing he didn't have it either."

The right-hander gave up runs in each of the first three innings. It could have been worse. He left the bases loaded in the first.

"My first innings are always the toughest," Eickhoff said, noting that on his first pitch he aimed for the corner and instead found the middle of the plate.

"That was kind of the story of the night," he said. "I'd execute a pitch but I'd follow it up with a pitch that maybe caught too much of the plate. I wasn't continuously hitting those corners."

He did not walk a batter while matching his longest start in the majors. He allowed no baserunners through four innings before Ryan Howard led off the fifth with a homer. Perez recovered with 10 straight outs.

The Braves ended their streaks of five straight losses overall and 11 straight at home.

Perez faced only one batter over the minimum. The only other hit he allowed was a one-out single in the eighth by Freddy Galvis. Pinch-hitter Darin Ruf then hit into a double play.

The Braves improved to 2-16 at Turner Field. Their 1-16 start in home games was the worst in the majors since the 1913 Yankees lost their first 17 decisions. The Yankees had one tie in that span, according to the Elias Sports Bureau.

Arodys Vizcaino allowed two-out singles to Odubel Herrera and Cesar Hernandez in the ninth before striking out Mikael Franco to end the game.

Perez was needed when scheduled starter Jhoulys Chacin was traded to the Los Angeles Angels for minor league left-hander Adam McCreery on Wednesday.

Perez retired the first 12 batters before Howard's eighth homer, an opposite-field shot that landed in the first row of the left-field seats. It was Howard's 22nd career homer at Turner Field - the most for any visiting player. Mets third baseman David Wright is second with 19.

Phillies: RHP Dalier Hinojosa, on the 15-day DL with a right hand contusion, will have tests to determine the cause of excess fluid around his hamate bone. ... OF Cody Asche (right oblique strain) is closer to coming off the DL. He played seven innings on defense in extended spring training and has been taking batting practice. He is scheduled to play a full game on Thursday.

Phillies: RHP Vince Velasquez (4-1), who ranks among the NL leaders with his 2.17 ERA and .188 opponents' batting average, will try to continue his strong start to the season in the final game of the series on Thursday night.

Braves: Rookie RHP Aaron Blair (0-2, 3.31) will look for his first win in his first appearance against the Phillies.