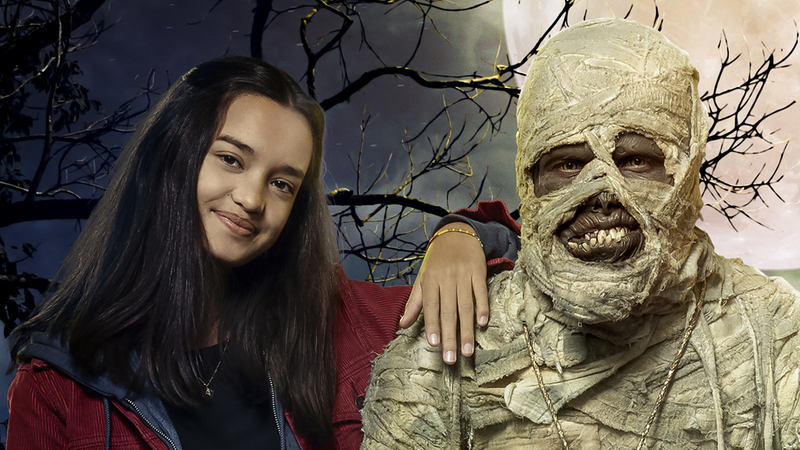 Sophia Hammons talks about starring in Disney Channel's 'Under Wraps'

NEW YORK -- Sophia Hammons stars in the new Disney Channel Original Movie "Under Wraps." Fans of a certain age may remember the first "Under Wraps" back in 1997. Now it's back with a new cast and a new look to bring it into the modern-day.

Sophia stars as "Amy" in "Under Wraps" and feels the character is quite different from herself.

"After watching the movie and watching myself be Amy, I definitely can tell that Amy and Sophia are two completely different people which while I was shooting the movie I didn't really find the differences, but now watching it, I definitely can tell that Amy is not like Sophia. She's very assertive and she knows what she wants, and I kind of like to go with the flow, I'm open to new ideas and new perspectives and she definitely has a plan for everything and it has to go her way, but that's an admirable trait because she's a great leader," she said.

The cast is rounded out with Christian J. Simon as "Gilbert," Malachi Barton as "Marshall," and who could forget the mummy "Harold" played by Phil Wright. The friends awakened Harold and have to race to get him back to his resting place before the clock strikes midnight.

More from the full cast of "Under Wraps"

The cast of Disney Channel's "Under Wraps" shares how the remake puts a modern spin on the beloved classic.

"It was so much fun getting to work with Christian and Malachi and Phil who play Gilbert, Marshall, and Harold. They became my best friends and we still are best friends. I just hung out with them the other day, and I try to hang out with them as much as I can, and it was super fun getting to make these really long-lasting friendships that, you know, it's always great to make new friends but especially when you know they're going to stick around," Sophia said.

Being a part of the new Disney Channel movie has given her some fun opportunities while promoting the film, like visiting Disneyland and getting scared at Halloween Horror Nights at Universal Studios.

"Like 9-year-old me is like freaking out right now. The other day I went to 'Halloween Horror Nights' with my co-star Christian who plays Gilbert and that was super fun because we were actually getting scared like in the movie and we actually kept saying like, 'If Gilbert can do this, we can do this,'" Sophia said.

Sandy Kenyon has more on Sophia Hammons, the star of the new Disney Channel Original Movie "Under Wraps."

Getting scared with her friends is one thing, but don't ask this budding young actress to watch a horror flick on her own.

"I'm not totally into scary movies, but watching scary movies with your friends is actually really fun. I kind of just started getting into that because I used to be really against horror movies because I don't really like being scared but honestly, after doing 'Under Wraps' and being scared and doing more Halloween-themed activities, and like I said, I'm kind of more into horror movies, but only with friends because if I do it by myself, I'll have nightmares for a really long time."

Being a part of "Under Wraps" has also opened her eyes to a whole new future that might include some behind-the-scenes work as well.