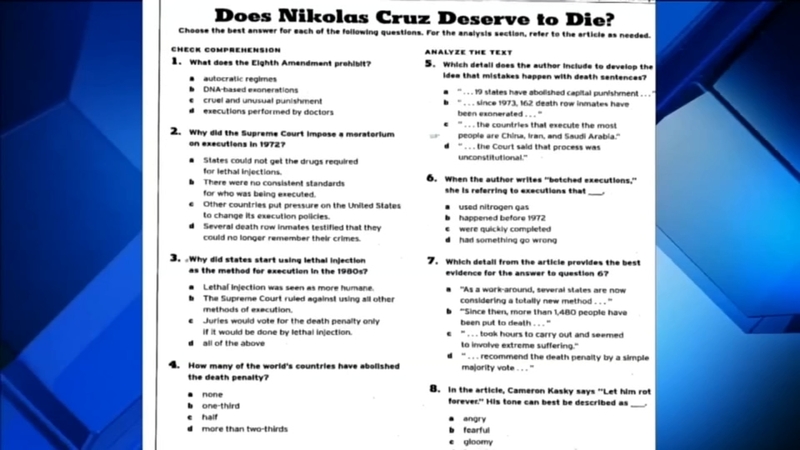 It's been less than a year since 17 people were killed at Marjory Stoneman Douglas High School in Parkland, Florida.

That is why there is outrage over a quiz that many say needlessly re-inflicts the pain and sense of loss created by the mass shooter.

A copy of the quiz has gone viral on social media.

Titled with the question: "Does Nikolas Cruz deserve to die?"

It was meant to be an assignment on the death penalty.

School officials say it was distributed to students at Coral Glades High School this week.

The high school is just a few miles away from Marjory Stoneman Douglas, where Cruz shot and killed 17 students and staff members earlier this year.

"These people lost their children for crying out loud, and my son could've been one of them, and a lot of our friends were killed, it's like sticking a knife in their stomach and turning it over and over," Levine says.

Stoneman Douglas survivor and student activist Cameron Kasky quoted the quiz, tweeting, "I cannot begin to express how pathetic I find this."

School board critic Andrew Pollack, who lost his daughter Meadow in the school shooting also commented, tweeting, "This is absolutely despicable," adding, "Does anyone at Broward schools have a brain?"

School staff posted a message on their website Friday, telling parents they were unaware of the assignment, that the material was from a subscription-based publication. The assignment has been pulled, and it's instituting a review and regrets the incident that occurred.

The publisher also released a statement, saying their intention was to "provide a platform for meaningful conversations around the history, civics and social impact of the death penalty."

"We deeply regret if the use of this real life example added in any way to the ongoing suffering of the students, families, and educators of the Parkland community," they added.