US, China put brakes on their trade dispute with ceasefire 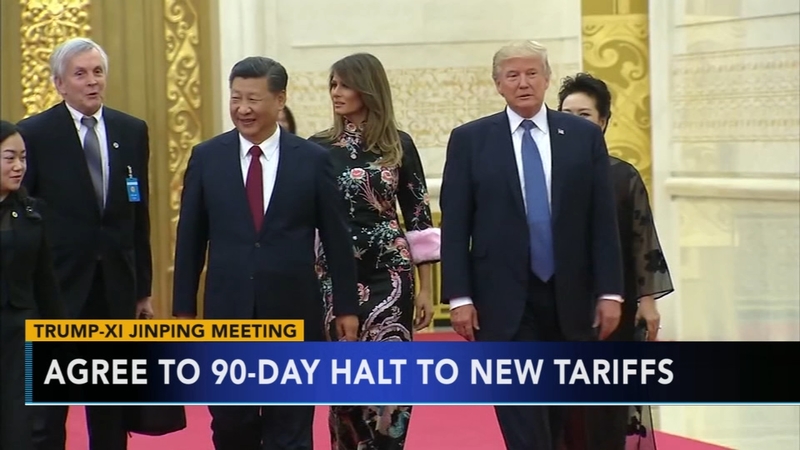 US, China put brakes on their trade dispute with ceasefire

BUENOS AIRES, Argentina -- The United States and China reached a 90-day ceasefire in a trade dispute that has rattled financial markets and threatened world economic growth. The breakthrough came after a dinner meeting between President Donald Trump and Chinese leader Xi Jinping at the Group of 20 summit in Buenos Aires.

Trump agreed to hold off on plans to raise tariffs Jan. 1 on $200 billion in Chinese goods. The Chinese agreed to buy a "not yet agreed upon, but very substantial amount of agricultural, energy, industrial" and other products from the United States to reduce America's huge trade deficit with China, the White House said.

The truce, reached after a dinner of more than two hours Saturday, buys time for the two countries to work out their differences in a dispute over Beijing's aggressive drive to supplant U.S. technological dominance.

In a long-sought concession to the U.S., China agreed to label fentanyl, the deadly synthetic opioid responsible for tens of thousands of American drug deaths annually, as a controlled substance. And Beijing agreed to reconsider a takeover by U.S. chipmaker Qualcomm that it had previously blocked.

The White House announcement framed a victory for Trump and his unflinching negotiating tactics, securing a commitment from China to engage in talks on key U.S. economic priorities, with little obvious concession by the U.S. Notably, however, the White House appears to be reversing course on its previous threats to tie trade discussions to security concerns, like China's attempted territorial expansion in the South China Sea.

"It's great the two sides took advantage of this opportunity to call a truce," said Andy Rothman, investment strategist at Matthews Asia. "The two sides appear to have had a major change of heart to move away from confrontation toward engagement. This changes the tone and direction of the bilateral conversation."

The Trump-Xi meeting was the marquee event of Trump's whirlwind two-day trip to Argentina for the G-20 summit after the president canceled a sit-down with Russian President Vladimir Putin over mounting tensions between Russia and Ukraine. Trump also canceled a Saturday news conference, citing respect for the Bush family following the death of former President George H.W. Bush.

Trump said Bush's death put a "damper" on what he described as a "very important meeting" with Xi.

The United States and China are locked in a dispute over their trade imbalance and Beijing's tech policies. Washington accuses China of deploying predatory tactics in its tech drive, including stealing trade secrets and forcing American firms to hand over technology in exchange for access to the Chinese market.

China has already slapped tariffs on $110 billion in U.S. goods.

Under the agreement reached in Buenos Aires, the two countries have 90 days to resolve their differences over Beijing's tech policies. If they can't, the higher U.S. tariffs will go into effect on the $200 billion in Chinese imports.

U.S. officials insist that the American economy is more resilient to the tumult than China's, but they remain anxious of the economic effects of a prolonged showdown - as Trump has made economic growth the benchmark by which he wants his administration judged.

A full-blown resolution was not expected to be reached in Buenos Aires; the issues that divide them are just too difficult.

Growing concerns that the trade war will increasingly hurt corporate earnings and the U.S. economy are a key reason why U.S. stock prices have been sinking this fall.

Joining other forecasters, economists at the Organization for Economic Co-operation and Development last week downgraded their outlook for global economic growth next year to 3.5 percent from a previous 3.7 percent. In doing so, they cited the trade conflict as well as political uncertainty.

The U.S. and China also made progress on the regulation of fentanyl, which is 50 times more powerful than heroin. U.S. officials for years have been pressing the Chinese government to take a tougher stance against fentanyl, and most U.S. supply of the drug is manufactured in China.

White House press secretary Sarah Sanders says China's decision to label the drug as a controlled substance means that "people selling Fentanyl to the United States will be subject to China's maximum penalty under the law."

The White House also said that China's government is "open to approving" the purchase of Dutch semiconductor manufacturer NXP by American chipmaker Qualcomm.

China's decision earlier this year came amid a period of heightening tensions between the U.S. and China over trade and intellectual property issues.

Qualcomm announced it was dropping plans to proceed with the deal after it failed to receive Chinese government approval. It is unclear whether the transaction could be revived even with China's acquiescence.

In other developments, Trump announced aboard Air Force One on his return to Washington from Buenos Aires that his next meeting with North Korea's Kim Jong Un would likely happen in January or February. He said there were three sites under consideration, but he declined to name them.

Trump also said he would shortly be providing formal notice to Congress that he will terminate the North American Free Trade Agreement, giving lawmakers six months to approve the replacement he signed Friday. He said lawmakers can choose between the replacement, the United States-Mexico-Canada Agreement, or nothing.