Trump on Russian meddling: 'Nobody really knows for sure' 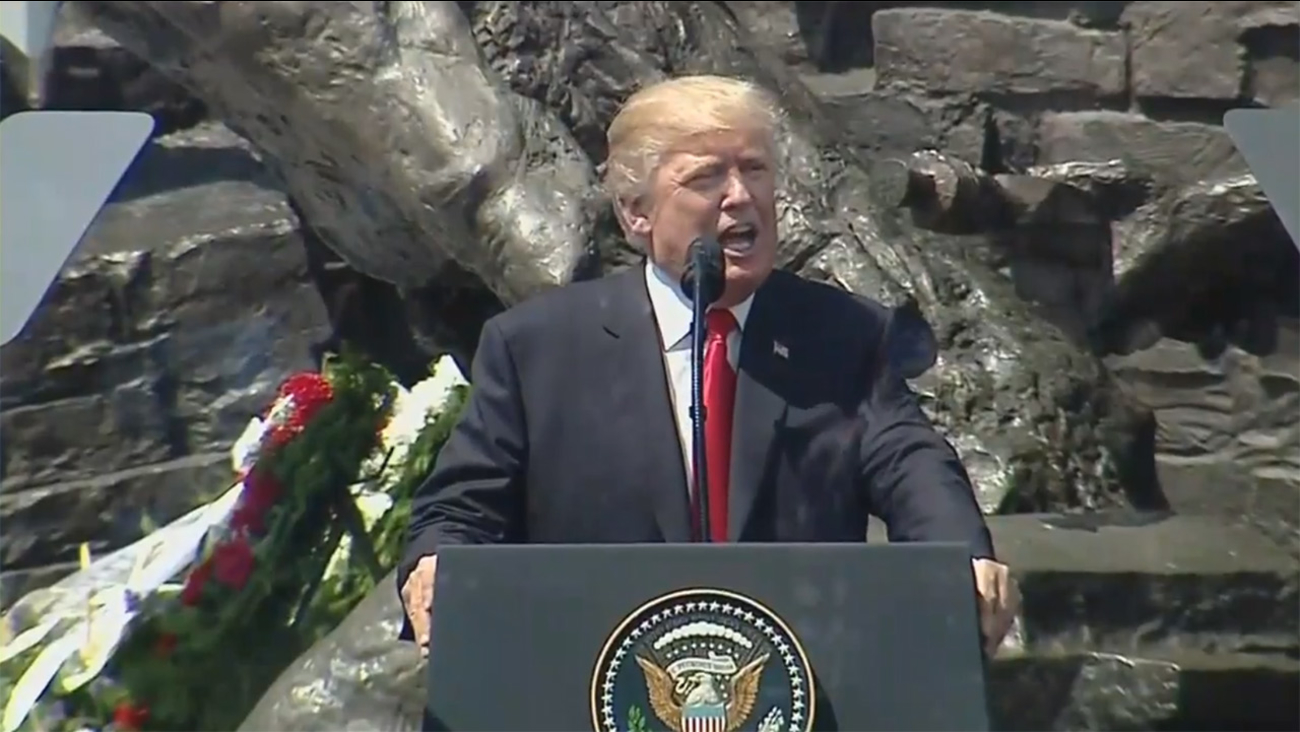 WARSAW, Poland -- Hours before a crucial meeting with Russian President Vladimir Putin, President Donald Trump stopped short Thursday of condemning Moscow for meddling in the U.S. presidential election - and refused to say if he would raise the issue when the leaders go behind closed doors.

Yet in a speech to a friendly crowd of thousands who chanted his name in downtown Warsaw, Trump sought to demonstrate that he wasn't overlooking Russian behavior that has sparked global concern, especially from Poland and other eastern and central European nations.

"We urge Russia to cease its destabilizing activities in Ukraine and elsewhere, and its support for hostile regimes, including Syria and Iran, and to join the community of responsible nations in our fight against common enemies and in defense of civilization itself," he said from Krasinski Square.

Trump then flew to Hamburg, Germany, where more than 100,000 protesters were expected to flood the city to stage massive protests against the Group of 20 summit. On the eve of the two-day meeting, German police used water cannons and pepper spray to disperse protesters in Hamburg after being attacked with bottles and stones by some marchers.

Trump's critique of Russia did not appear to extend to its actions during last year's presidential campaign. Multiple U.S. intelligence agencies have concluded that Russia meddled in the election to benefit Trump, who has refused to embrace the finding wholeheartedly.

During a news conference before his speech praising Poland for overcoming adversity, Trump again questioned the reliability of U.S. intelligence on the election issue and argued that Russia wasn't the only country that might be guilty of interfering.

"Nobody really knows for sure," Trump said.

Poland's conservative government had promised the U.S. president enthusiastic crowds in its invitation to Trump, Polish media had reported, and it clearly delivered.

Opening his second overseas trip since taking office in January, Trump also warned North Korea that he's considering "some pretty severe things" in response to the isolated nation's unprecedented launch this week of a missile capable of reaching the U.S. He offered no details, but called on all nations to confront North Korea's "very, very bad behavior."

Trump also stated unequivocally that the U.S. stands "firmly behind Article 5," the NATO provision requiring members to defend each other if they come under attack. He had disappointed U.S. allies by declining to affirm that commitment during his first trip to Europe in May.

As U.S. investigations into Russia's interference continue, Trump is under intense scrutiny over how he handles his first face-to-face meeting Friday with Putin, a former Russian intelligence agent. They will meet in Hamburg on the sidelines of the summit of the world's rich and developing nations.

A group of senior Democratic U.S. senators served notice Thursday that Trump would be in "severe dereliction" of his presidential duty if he fails to confront Putin over the issue, telling Trump in a letter that he must make clear that Russia's interference in U.S. democracy will not be tolerated.

"The upcoming elections cannot be a playground for President Putin," said Minority Leader Chuck Schumer of New York; Dick Durbin of Illinois, the Senate's No. 2 Democrat; and the top Democrats on the Intelligence, Armed Services, and Foreign Relations committees.

Unwilling to cast doubt on the legitimacy of his election victory, Trump has avoided firmly blaming Russia for the campaign hacking. He skirted the blame game again Thursday, arguing at turns that it could have been, probably was and indeed was Russia.

He insisted that other countries could have been involved, too.

Trump demurred when asked whether he would raise the election issue with Putin. He sought instead to turn the question around on his predecessor, blaming then-President Barack Obama for essentially sanctioning Moscow's interference.

Though the Obama administration warned Russia publicly and privately before the Nov. 8 election to quit interfering, questions have since been raised about whether Obama acted aggressively enough to stop the threat.

"They say he choked - well, I don't think he choked," Trump said at a news conference with Polish President Andrzej Duda. "I think he thought Hillary Clinton was going to win the election, and he said, 'Let's not do anything about it.'"

Using information collected by the FBI, CIA and National Security Agency, the U.S. national intelligence director last year concluded that Moscow was behind the hack of Democratic Party email systems and attempted to influence the 2016 election to benefit Trump. The Obama administration said the effort was directed from the "highest levels" of Russia's government - a reference to Putin.

"Mistakes have been made" by U.S. intelligence, said Trump, offering a reminder that America's spy agencies had once been confident that Iraq possessed weapons of mass destruction. He said that created "one big mess" in the form of the Iraq war. Though Trump has made similar statements before, it was an extraordinary public expression of doubt about U.S. intelligence capabilities by a president while on foreign soil.

Trump met in Hamburg with German Chancellor Angela Merkel, host of the summit. He was following that by having dinner with the leaders of South Korea and Japan, with the discussion focused on the threat posed by their North Korean neighbor.

In Poland, Trump also used time at the news conference with Duda to sharply criticize some U.S. news organizations for their coverage of his presidency. That elicited some sympathy from Duda, who suggested that he, too, was covered unfairly.

Before the speech in Poland, Trump and his wife, Melania, laid a wreath at a monument commemorating the 1944 Warsaw Uprising against Nazi occupation. Warsaw police told The Associated Press that some 15,000 people attended Trump's speech. Many waved U.S. and Polish flags and gathered near TV screens that were specifically set up in the square to broadcast Trump's address.