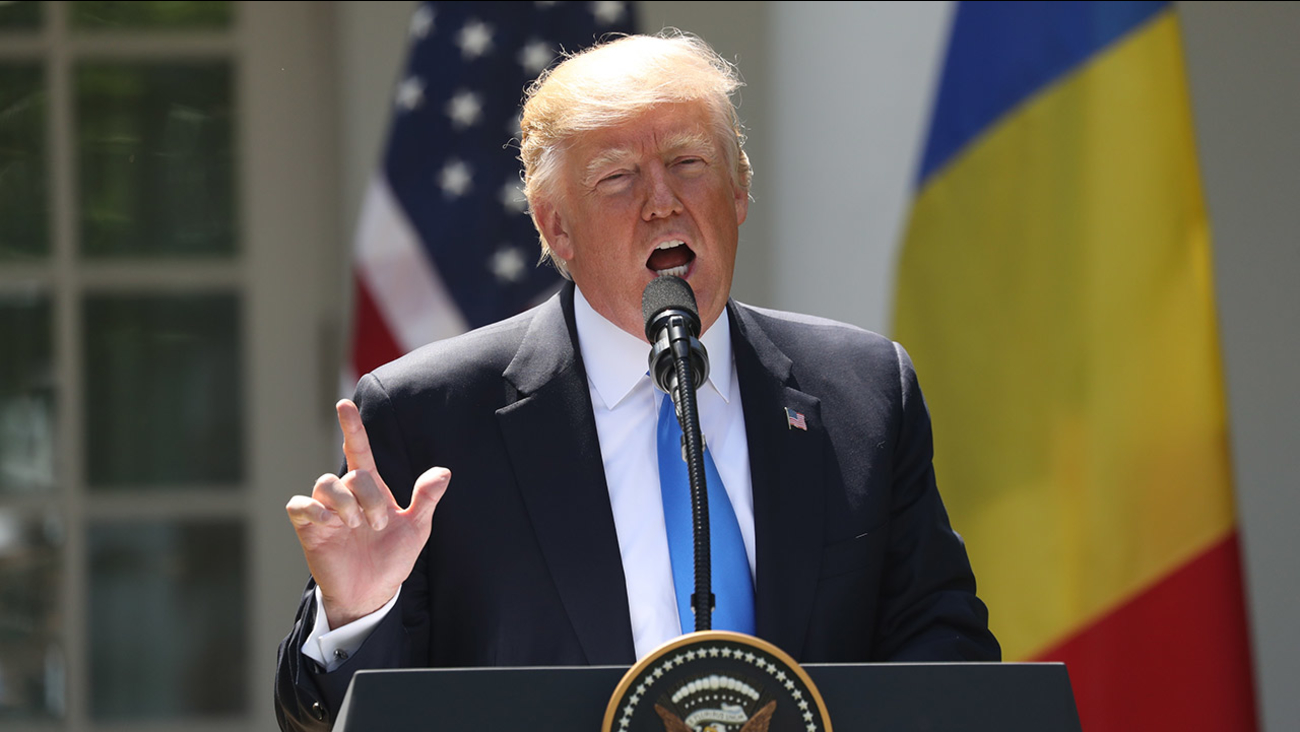 WASHINGTON -- President Donald Trump refused Friday to say whether his private conversations with fired FBI Director James Comey were taped - a matter at the heart of conflicting accounts of what passed between them - and asserted that nothing in Comey's testimony to the Senate showed collusion with Russia or obstruction of justice.

He further denied ever asking Comey for his "loyalty," contradicting Comey's detailed allegations in his sworn testimony.

"No I didn't say that," Trump stated abruptly, taking questions after meeting Romanian President Klaus Iohannis. Asked if he would make that denial under oath, he said: "100 percent."

Pres. Trump to @JonKarl: "100%" would be willing to testify under oath about Comey convos after saying "some" of what he said wasn't "true" pic.twitter.com/xuNKbI2ozs

Trump's aides have repeatedly dodged questions about whether conversations relevant to the Russia investigation have been recorded, and so did the president.

"Well, I'll tell you about that maybe sometime in the very near future," Trump said. "I'm not hinting anything." He added: "Oh you're going to be very disappointed when you hear the answer, don't worry."

Comey told the Senate of multiple conversations alone with the president, during which he said Trump pressed him to show "loyalty," to back off on the FBI investigation of aide Michael Flynn and to disclose that Trump himself was not under investigation as the FBI probed Russian interference in the election and ties between the Trump campaign and Russia.

Comey said he refused on all points, told senators of the detailed memos he had written after his conversations with Trump and said he hoped those conversations were taped because he is confident of their veracity.

Standing with Iohannis, a NATO partner, Trump at last confirmed his commitment to the alliance's mutual defense pact, Article 5, uttering words he deliberately did not say when he spoke at NATO's gathering in Belgium last month. On Friday he said he was "committing the United States to Article 5."

Earlier, Trump, who had refrained from tweeting all day Thursday - even as Comey accused his administration of spreading "lies" and suggested Trump had attempted to influence the investigation into Russian interference in the 2016 election - struck back in an early-morning tweet.

"Despite so many false statements and lies, total and complete vindication," Trump wrote, suggesting that Comey had committed perjury.

Trump also seized on Comey's revelation that he had directed a friend to release memos he'd written documenting his conversations with the president to a reporter.

Trump also retweeted a comment from attorney Alan Dershowitz, who had written: "We should stop talking about obstruction of justice. No plausible case. We must distinguish crimes from" political "sins."

Although Comey refused to say to senators whether he thought Trump had obstructed justice, he suggested that matter would be considered by the special prosecutor recently appointed to investigate links between Trump associates and Russians - hardly a statement of vindication for the president.

Trump had stayed unusually quiet on Thursday, refraining from weighing in on the testimony gripping the country both on Twitter and at several public appearances. Instead, Trump let his lawyer do the talking for him.

But the self-imposed silence didn't last.

In his first congressional appearance since being abruptly fired by Trump last month, Comey detailed months of distrust of the president and bluntly asserted that Trump had fired him to interfere with the probe of Russia's ties to the Trump campaign.

He said that he'd carefully documented his interactions with Trump because he worried Trump would misrepresent them, and accused the administration of spreading "lies, plain and simple" about the reasons for his firing.

Comey's testimony underscored the discord that had soured their relationship. He painted Trump as a chief executive dismissive of the FBI's independence and made clear that he interpreted Trump's request to end an investigation into Flynn, his former national security adviser, as an order coming from the president.

Comey also revealed that he'd orchestrated the public release of information about his private conversations with the president in an effort to further the investigation.

Trump's private attorney, Marc Kasowitz, seized on the admission, casting the former FBI director as one of the "leakers" set on undermining the Trump administration.

The attorney is expected to file a complaint with the Justice Department inspector general about the revelation next week, according to a person close to the legal team who agreed to speak before the filing on condition that the person's name is not used.

Kasowitz also maintained that the testimony made clear that Trump "never, in form or substance, directed or suggested that Mr. Comey stop investigating anyone."

While Trump's staunchest supporters have tried to paint Comey's testimony as vindication for the president, few Republicans who don't work for Trump stepped in to defend the president's version of his contacts with Comey.

Sen. Susan Collins, a moderate Republican, said Congress needs to obtain any tapes the president might have of his dealings with the former FBI director. She called Comey an "honorable individual."

"I found him to be credible, candid and thorough," Collins said of Comey on MSNBC's "Morning Joe."

Collins, a member of the Senate intelligence committee, which is investigating Russia's interference in the 2016 election, said Comey's motivation "may have been a good one." But, she said, he was wrong to leak his notes to the public and should have given that document to her panel.