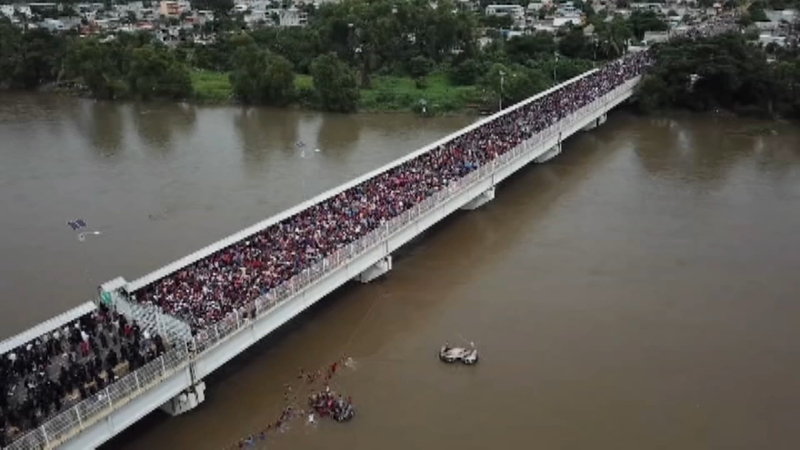 TAPACHULA, Mexico -- Thousands of Central American migrants resumed an arduous trek toward the U.S. border Monday, with many bristling at suggestions there could be terrorists among them and saying the caravan is being used for political ends by U.S. President Donald Trump.

The caravan's numbers have continued to grow as they walk and hitch rides through hot and humid weather, and the United Nations estimated that it currently comprises some 7,200 people, "many of whom intend to continue the march north."

However, they were still at least 1,140 miles (1,830 kilometers) from the nearest border crossing - McAllen, Texas - and the length of their journey could more than double if they go to Tijuana-San Diego, the destination of another caravan earlier this year. That one shrank significantly as it moved through Mexico, and only a tiny fraction - about 200 of the 1,200 in the group - reached the California border.

The same could well happen this time around as some turn back, splinter off on their own or decide to take their chances on asylum in Mexico - as 1,128 have done so far, according to the country's Interior Department.

While such caravans have occurred semi-regularly over the years, this one has become a particularly hot topic ahead of the Nov. 6 midterm elections in the U.S., and an immigrant rights activist traveling with the group accused Trump of using it to stir up his Republican base.

"It is a shame that a president so powerful uses this caravan for political ends," said Irineo Mujica of the group Pueblo Sin Fronteras - People Without Borders - which works to provide humanitarian aid to migrants.

Some have questioned the timing so close to the vote and whether some political force was behind it, though by all appearances it began as a group of about 160 who decided to band together in Honduras for protection and snowballed as they moved north.

"No one is capable of organizing this many people," Mujica said, adding that there are only two forces driving them: "hunger and death."

Earlier in the day Trump renewed threats against Central American governments and blasted Democrats via Twitter for what he called "pathetic" immigration laws.

In another tweet, he blamed Guatemala, Honduras and El Salvador for not stopping people from leaving their countries. "We will now begin cutting off, or substantially reducing, the massive foreign aid routinely given to them," he wrote.

A team of AP journalists traveling with the caravan for more than a week has spoken with Hondurans, Guatemalans and Salvadorans, but has not met any Middle Easterners, who Trump suggested were "mixed in" with the Central American migrants.

It was clear, though, that more migrants were continuing to join the caravan.

Ana Luisa Espana, a laundry worker from Chiquimula, Guatemala, joined the caravan as she saw it pass through her country.

Even though the goal is to reach the U.S. border, she said: "We only want to work and if a job turns up in Mexico, I would do it. We would do anything, except bad things."

"There isn't a single terrorist here," Contreras said. "We are all people from Honduras, El Salvador, Guatemala and Nicaragua. And as far as I know there are no terrorists in these four countries, at least beyond the corrupt governments."

The migrants, many of them with blistered and bandaged feet, left the southern city of Tapachula in the early afternoon Monday under a burning sun bound for Huixtla, about 25 miles (40 kilometers) away.

In interviews along the journey, migrants have said they are fleeing widespread violence, poverty and corruption. The caravan is unlike previous mass migrations for its unprecedented large numbers and because it largely sprang up spontaneously through word of mouth.

Carlos Leonidas Garcia Urbina, a 28-year-old from Tocoa, Honduras, said he was cutting the grass in his father's yard when he heard about the caravan, dropped the shears on the ground and ran to join with just 500 lempiras ($20) in his pocket.

"We are going to the promised land," Garcia said, motioning to his fellow travelers.

Motorists in pickups and other vehicles have been offering the migrants rides, often in overloaded truck beds, and a male migrant fell from the back of one Monday and died.

"It is the responsibility of the driver, but it is very dangerous, and there you have the consequences," Mexican federal police officer Miguel Angel Dominguez said, pointing to a puddle of blood around the man's head.

Police started stopping crowded trucks and forcing people to get off.

Caravan leaders have not defined the precise route or decided where on the U.S. border they want to arrive, but in recent years most Central American migrants traveling on their own have opted for the most direct route, which takes them to Reynosa, across from McAllen.

Late Sunday, authorities in Guatemala said another group of about 1,000 migrants had entered that country from Honduras.

"We have had people who have ankle or shoulder injuries, from falls during the trip, and even though we have offered to take them somewhere where they can get better care, they have refused, because they fear they'll be detained and deported," Garcia said.

Roberto Lorenzana, a spokesman for El Salvador's presidency, said his government hopes tensions over the caravan decrease after the U.S. elections.

"We have confidence in the maturity of United States authorities to continue strengthening a positive relationship with our country," Lorenzana said.

Asked if he thinks Trump will follow through on his threat to cut aid to El Salvador, he said, "I don't know. Of course the president has a lot of power, but they will have to explain it there to the different government structures."

Lorenzana added that El Salvador has significantly reduced violence, a key driver of migration, and that the flow of Salvadoran migrants has dropped 60 percent in two years.

U.N. deputy spokesman Farhan Haq said large numbers of migrants were still arriving in Mexico and were "likely to remain in the country for an extended period."

The first waves of migrants began arriving in the southern town of Huixtla after an exhausting eight-hour trek and quickly staked out grassy spots in the town square to bed down overnight.

Castellanos said the family walked for six hours until they could go no farther. They saw the dead man who fell from the truck, and the danger of being on the road was troublesome, out in the middle of the countryside far from an ambulance or medical care should the kids to pass out in the heat.