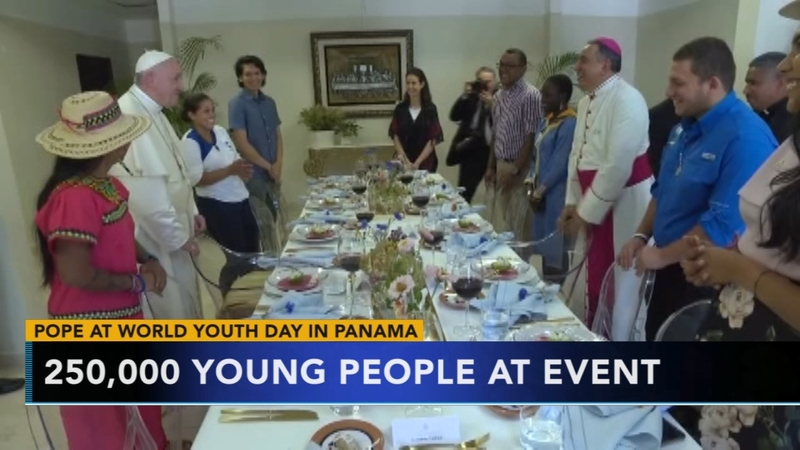 PANAMA CITY -- Young people challenged Pope Francis on the Catholic Church's sex abuse scandal and the plight of Christians in the Middle East as the youth took center stage Saturday in the final events of World Youth Day in Panama.

Organizers said some 600,000 people turned out for Saturday's main event, an evening vigil service in the Metropark area of east Panama City. Many of them were spending the night in tents or just on sleeping mats to be in place for an early morning final Mass formally ending the religious festival.

After looping through the cheering crowds in his popemobile, Francis told the young he understood their anxieties and fears for a future where jobs are scarce and education not always available.

"It is easy enough to criticize and complain about young people if we are depriving them of the jobs, education and community opportunities they need to take root and to dream of a future," he told the pilgrims, many of whom clutched rosaries, swayed in prayer and draped themselves in flags from across the Americas and beyond.

The vigil was the culmination of a busy day for Francis that included a luncheon with 10 young pilgrims representing each of the continents. The Vatican described the atmosphere as familiar and festive, and the young people said they were surprised at Francis' informality and interest in their questions.

Brenda Noriega, a Mexican-born youth minister from San Bernardino, California, said she told Francis that the sex abuse scandal in the United States was a "crisis right now we cannot avoid talking about." She said Francis called abuse a "horrible crime" and assured her that the church was committed to supporting victims.

She said Francis also stressed the need for prayer, noting that he sent U.S. bishops on a retreat with his own preacher earlier this month ahead of his big summit on abuse prevention in February at the Vatican.

"For me as a youth minister, that means a lot," Noriega told reporters after the luncheon. "Youth ministers, we have been with people who have been angry but sometimes we forget about prayer. We react too easy and too fast. So I think what His Holiness is telling us and the church is to first pray, build community and not forget about accompaniment."

It was the first time the abuse scandal has come up publicly during Francis' four-day visit to Panama. The abuse scandal hasn't erupted publicly in Central America in the same way it has in the U.S., where the Catholic hierarchy is facing a crisis in confidence over its decades-long failures to protect young people from priests who rape and molest children.

During the luncheon, held on the campus of Panama City's main seminary, the guests peppered Francis with questions.

Palestinian pilgrim Dana Salah said she asked Francis about the flight of Christians from the lands of Jesus' birth. She said the pope assured her "'Palestine will always remain the land of Jesus.'"

Emilda Santo Montezuma, an indigenous Panamanian, said she spoke to Francis about the environment and the rights of indigenous peoples - two issues particularly dear to Francis' heart which will be the focus of a meeting of Amazonian bishops at the Vatican later this year. Francis' support, she said, would embolden indigenous people to fight for their rights.

"It fills me with a lot of strength and to say to young people that we can do a lot, and more than we have done," she told reporters.

Francis started the day by reopening Panama City's main cathedral, Santa Maria la Antigua, which is considered the first cathedral of mainland America. He also consecrated its altar after a yearslong renovation, rubbing holy oil onto the altar's marble top, his vestment sleeves rolled up.

In his homily, Francis spoke frankly about the pressures, frustrations and anxieties facing priests and nuns in a rapidly changing world where it sometimes seems the Catholic message has no place.

Francis warned their weariness can sometimes be paralyzing due to the burdens of their work and the "toxic" conditions in some of their communities.

"The weariness of hope comes from seeing a church wounded by her own sin, which so often failed to hear all those cries that echoed the cry of the Master: 'My God, why have you forsaken me?'" Francis said.

Francis wraps up his visit Sunday with the morning Mass and a visit to a church-run home for people suffering HIV.