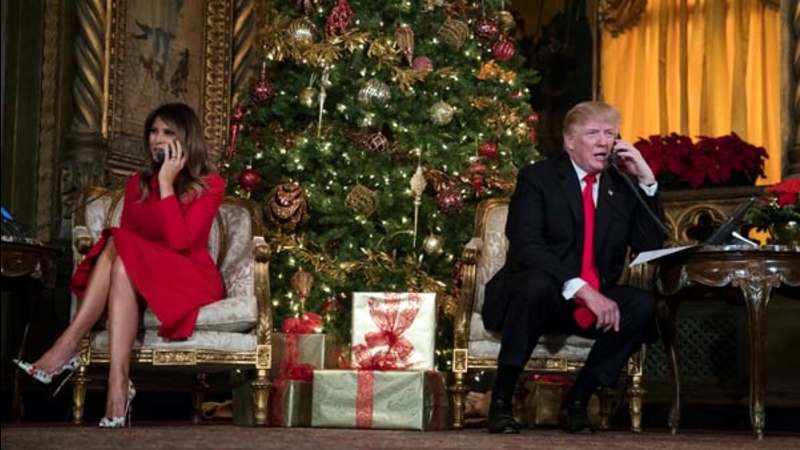 PALM BEACH, Fla. -- President Donald Trump's first Christmas Eve in office was a busy one that unfolded like this: tweet against perceived adversaries, cheer U.S. troops spending the holiday overseas, play golf, chat with children anxious to know when Santa would get to their homes and eat dinner with the family.

"Today and every day, we're incredibly thankful for you and for your families," Trump told the troops via video hook-up from his Florida estate, where he is spending the holidays with his family. "Your families have been tremendous. Always underappreciated, the military families. The greatest people on Earth."

Trump briefly addressed members of the Army, Navy, Air Force, Marine Corps and Coast Guard stationed in Qatar, Kuwait and Guantanamo Bay, Cuba, and patrolling the Strait of Hormuz in the Middle East.

Trump complimented each branch of the armed forces, starting with the Army's "Iron Brigade" combat team in Kuwait, which he said is performing a "vital mission" by partnering with the Iraqi, Kuwaiti, Saudi Arabian and Jordanian armies.

He said a Kuwait-based, Marine Corps air-ground task force has provided more than 4,000 flight hours of close air support in the campaign against the Islamic State group, and he thanked sailors aboard the USS Sampson for defending "high-value assets" in the Strait of Hormuz.

Trump also singled out the Air Force's 69th Expeditionary Bomb Squadron in Qatar for engaging more than 700 IS and Taliban targets in five separate countries and winning two trophies in an Air Force bomb competition.

He showered the most praise on the Coast Guard, which impressed him with its rescue operations during a devastating hurricane season.

"You've done such an incredible job in Texas and Florida and Puerto Rico," Trump said. "Many Republicans are very happy but, I have to tell you, the people of Florida, Texas, Puerto Rico and lots of other states are even more happy. What a job you've done ... saved thousands and thousands of lives."

Puerto Ricans, however, may quibble with the president's assessment of their state of mind.

Power generation on the U.S. territory is at 65 percent, with nine of Puerto Rico's 78 municipalities still completely in the dark more than three months after Hurricane Maria walloped the island. The U.S. Army Corps of Engineers has estimated power will not be fully restored across Puerto Rico until May. More than 200,000 homes were damaged and more than 30,000 people have lost their jobs, sparking an exodus of more than 200,000 Puerto Ricans to Florida alone.

In closing, Trump offered thanks to those who are spending time away from their families to "defend all of our families, our freedoms and our pride."

"Every American heart is thankful to you and we're asking God to watch over you and to watch over your families," he said, before he asked journalists to leave the room so he could begin answering any service member questions.

Trump began the day by tweeting against a top FBI official he has suggested is biased against him, as well as the news media. The president also spent several hours playing golf at his private club in West Palm Beach.

Later Sunday, the president and first lady Melania Trump fielded calls from children eager to know how soon Santa Claus would get to their homes. Trump and his wife engaged callers on separate telephones at their Mar-a-Lago estate as they sat in chairs on opposite sides of a large Christmas tree. The calls came by way of a Santa tracking program run for more than 60 years by the North American Aerospace Defense Command. Journalists could only hear the president's side of the conversations.

Trump told a caller from Mississippi that the state is "great" and predicted that "Santa is going to treat you very well."

He offered encouragement when a caller from Virginia wanted to find building blocks under the Christmas tree. Trump, who made his name and fortune building things, said: "That's what I always liked, too."

"Santa moves very quickly. He'll be at your house very late at night when you're sleeping," Trump said.