Trump and Time Magazine dispute Person of the Year plans 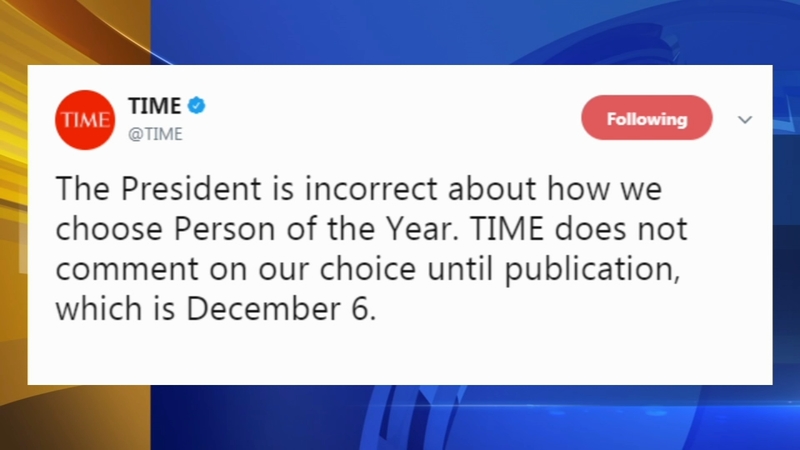 Trump and Time magazine dispute Person of the Year plans

WASHINGTON -- President Donald Trump says he's not playing ball with Time magazine as it decides its Person of the Year. The magazine counters that Trump has it all wrong.

In a tweet Friday as he spent the Thanksgiving holiday in Florida, Trump sounded dismissive of the honor he received last year and could well receive again.

He tweeted: "Time Magazine called to say that I was PROBABLY going to be named 'Man (Person) of the Year,' like last year, but I would have to agree to an interview and a major photo shoot. I said probably is no good and took a pass. Thanks anyway!"

Time later posted a tweet of its own disputing Trump's account: "The President is incorrect about how we choose Person of the Year. TIME does not comment on our choice until publication, which is December 6."

Trump frequently brags about appearing on the cover of the iconic magazine. He has falsely claimed to hold the record for cover appearances.

Time's Person of the Year is defined by the weekly as "a person (or people) who has had the most influence over the news in the last 12 months." Awarded since 1927, the accolade has gone to a wide variety of people - even Adolf Hitler, in 1938, and Joseph Stalin, in 1939 and 1942.