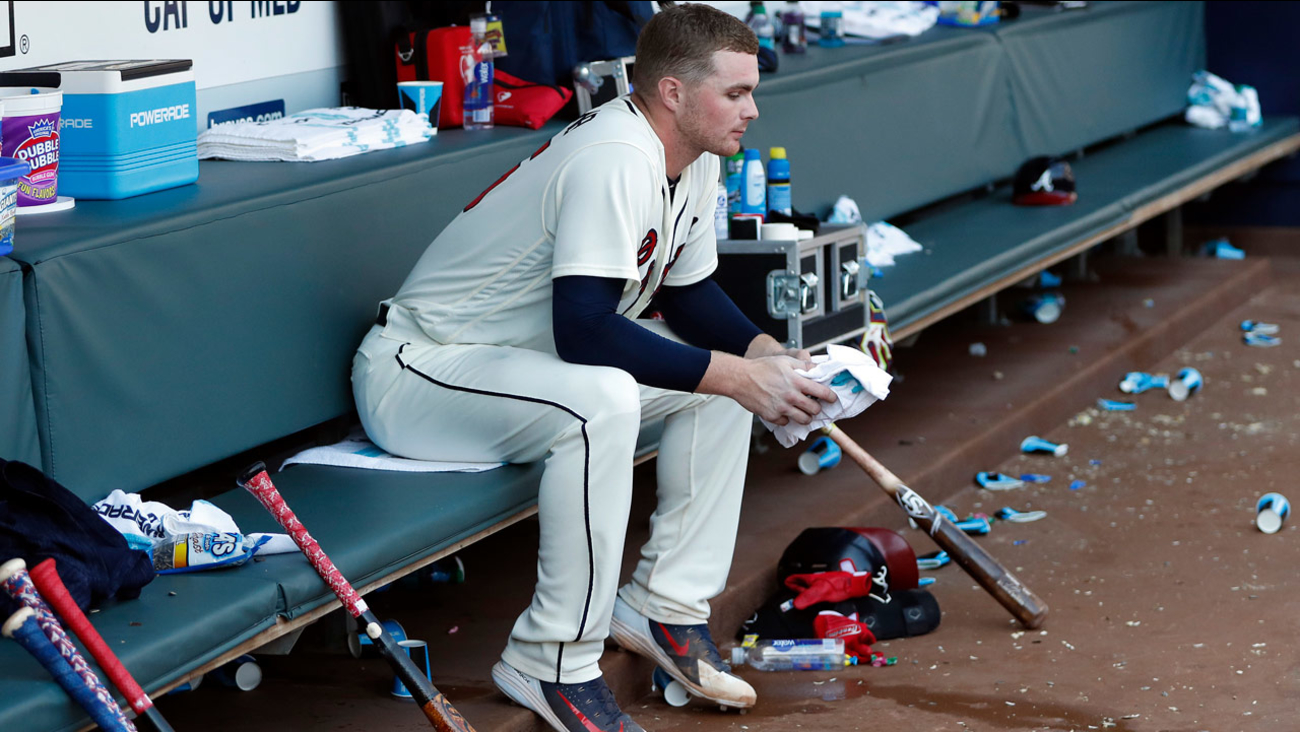 Atlanta Braves starting pitcher Sean Newcomb sits on the bench after losing his bid for a no-hitter in the ninth inning against the Los Angeles Dodgers, July 29, 2018, in Atlanta. (AP Photo/John Bazemore)

As major leaguers Trea Turner, Sean Newcomb and Josh Hader face up to racist and homophobic tweets they sent as teenagers, publicist Lauren Walsh recalls how she dealt with a football player who had offensive Facebook posts years before he prepared for the NFL draft.

She went through his whole social media history, taking down any posts that even raised an eyebrow.

Scrubbing tweets, Instagram posts and other comments, captions and status updates has grown into a top priority for LW Branding, Walsh's company that has helped 40 NFL athletes with image control in the past 3 1/2 years.

"Any client that we take on, that's generally the first step we do in the process," Walsh said. "This can take someone down in an instant. All it takes is one tweet. Now, he's going to be known for this. This is what people are talking about."

Turner and Newcomb are the latest high-profile athlete s burned by reckless posts from years past. The 25-year-old Newcomb nearly threw a no-hitter for the Braves against the Dodgers on Sunday - a career defining moment that took a turn when he called reporters back into the clubhouse to apologize for offensive tweets sent in 2011 and 2012, when he was 18.

Homophobic and racially insensitive tweets by Turner from 2011 and 2012 surfaced Sunday night. The 25-year-old Turner, a shortstop for the Washington Nationals, apologized in a statement released by the team.

"I believe people who know me understand those regrettable actions do not reflect my values or who I am," Turner said. "But I understand the hurtful nature of such language and am sorry to have brought any negative light to the Nationals organization, myself or the game I love."

Hader, who pitches for the Milwaukee Brewers, is still in apology mode after tweets from his past surfaced during the All-Star Game this month. He was given a standing ovation in his first game back in Milwaukee, and then booed when the Brewers made their first road trip of the second half of the season in San Francisco.

The trend touches many young athletes, with millions of posts from thousands of players who have been online since they were kids.

Former Wyoming quarterback Josh Allen apologized for a series of offensive tweets he sent while in high school that were revealed right before the NFL draft, when the Buffalo Bills selected him seventh overall. As Villanova's Donte DiVincenzo was celebrating being named most outstanding player of the Final Four, some of his old tweets that included racially insensitive and homophobic comments made headlines.

"This stuff happens all the time and it happens when they get their shining moment," Walsh said. "When all of us were 17, we weren't thinking about where we were going to be in our lives seven years down the road."

But athletes should start thinking about the bigger picture, as damage from slip-ups can be critical to coaches and executives, Walsh said.

The mistakes by Turner, Hader and Newcomb will be discussed by athletic departments, professional teams, agents and handlers looking to protect themselves and their players. As higher-ups grow more aware of the damage social media mishaps can cause, vetting could become more rigid as a key part of evaluating a multimillion-dollar investment.

"In light of recent events, that's definitely something our staff will discuss to potentially eliminate the chance of a negative situation that puts a student-athlete in a bad light," said Creighton spokesman Rob Anderson, who said he doesn't know of any staffer going through a player's entire social media history.

Varsity Monitor keeps up with social media and offers education programs for 15 Division I schools, including North Carolina, Texas and Florida. Chief executive Joe Purvis said business is at an all-time high since 2010, with sales doubling in the past year.

It's not just athletes who should be wary of their past mistakes, Purvis said.

"Sports recruiters and normal employment recruiters are now looking at social media profiles as well as resumes as a standard of that person's character," he said. "If your social profiles have negative posts, they will assume you are negative."

In the sports world, college might actually be too late to make changes. Social media can factor into whether an athlete is even offered a scholarship.

"We've stopped recruiting someone based on what kind of person he is after coaches had chances to assess everything in their life, including social media," said Georgia Southern spokesman Bryan Johnston.

Most schools designate a member of each team's coaching staff to monitor the social media channels of athletes. But the sheer volume of several hundred athletes per school makes it nearly impossible to keep up with everything.

Many schools have presentations early in the school year to educate students about the importance of being smart about social media. North Carolina brings in Derrick Mayes, a former NFL player and co-founder of 5.0 Communications, for "scared straight" seminars to athletes.

"When the reputation of your university, of your program is judged by what a teenager is doing on social media, the more that you can do to try to minimize those surprises, the better for everybody," North Carolina spokesman Steve Kirschner said.

Walsh suggests athletes and average Joes alike scrub their accounts once a year like a spring cleaning, leaving nothing to chance. And to use social media in a positive way.

"Be authentic," she said. "Define your brand and values. And then, you put out your content."

Even better to make smart decisions to begin with so there's no situation to fix, said Purdue spokesman Tom Schott.

"Once you put it out there, regardless of what you think you've deleted, it's probably going to be out there in some form or fashion," he said.