Trump working with governors to send troops to guard border 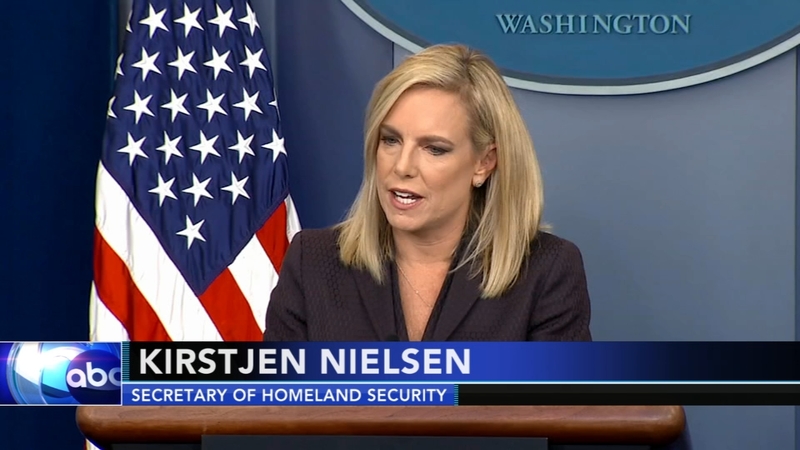 Trump working with governors to send troops to guard border

"The threat is real," Nielsen said, adding that Trump was signing a proclamation to put the deployment into effect. "It's time to act."

The announcement came hours after Trump pledged "strong action today" on immigration and a day after he said he wanted to use the military to secure the southern border until his long-promised border wall is erected.

Nielsen said she's been in touch with governors on the southwest border states and has been working with them to develop agreements that will oversee where and how many Guardsmen will be deployed. She suggested some troops could begin arriving as soon as Wednesday night, though other administration officials cautioned that details on troop levels, locations and timing were still being worked out.

"We do hope that the deployment begins immediately," she said.

Trump has been frustrated by slow action on building his "big, beautiful wall" along the Mexican border - the signature promise of his campaign - as well as a recent uptick in illegal border crossings that had plunged during the early months of his presidency. He has also bothered that the spending bill he grudgingly signed last month includes far less money for the wall than he'd hoped for.

Federal law prohibits the use of active-duty service members for law enforcement inside the U.S., unless specifically authorized by Congress. But over the past 12 years, presidents have twice sent National Guard troops to the border to bolster security and assist with surveillance and other support.

Nielsen said the effort would be similar to a 2006 operation in which President George W. Bush deployed troops to help U.S. Customs and Border Protection personnel with non-law enforcement duties while additional border agents were hired and trained. President Barack Obama also sent about 1,200 troops in 2010 to beef up efforts against drug smuggling and illegal immigration.

Nielsen said her department had developed a list of locations where it would like assistance and was discussing with the governors how to facilitate the plans. She declined to say how many personnel would be needed or how much the operation would cost, but she insisted, "It will be as many as is needed to fill the gaps that we have today."

One congressional aide said that lawmakers anticipate 300 to 1,200 troops will be deployed and that the cost was expected to be at least $60 million to $120 million a year. The Pentagon would probably need authorization from Congress for any funding beyond a few months, said the aide, who wasn't authorized to speak publicly and spoke on condition of anonymity.

Governors of the four U.S. states bordering Mexico were largely supportive of the move. The office of California Gov. Jerry Brown, a Democrat who has sparred with Trump on immigration issues, said any federal request would be promptly reviewed to determine how the state could best offer its assistance.

But in Mexico, senators urged President Enrique Pena Nieto to temporarily suspend cooperation with the U.S. on immigration and security issues. In a nonbinding statement approved unanimously Wednesday, the senators asked Mexico's government to freeze joint efforts "in the fight against transnational organized crime" until Trump starts acting "with the civility and respect that the people of Mexico deserve."

Trump first revealed Tuesday that he'd been discussing the idea of using the military at the border with Defense Secretary Jim Mattis.

He spent the first months of his presidency bragging about a dramatic drop in illegal border crossings, which some DHS officials had even dubbed the "Trump effect." Indeed, arrests at the border last April were at the lowest level since DHS was created in 2003, and the 2017 fiscal year saw a 45-year low for Border Patrol arrests.

But the numbers have been slowly ticking up since last April and are now on par with many months of the Obama administration. New statistics released Wednesday show about 50,000 arrests of people trying to cross the southwest border last month, a 37 percent increase from the previous month, and a 203 percent increase compared to March 2017.

Trump's new focus on hard-line immigration policies appears aimed, at least in part, in drawing a political contrast with Democrats heading into the midterm elections. He has also been under growing pressure from conservative backers who have accused him of betraying his base for not delivering on the wall, and he was set off by images played on his favorite network, Fox News, of a "caravan" of migrants making their way through Mexico.

In Texas, which already has about 100 National Guard members stationed on the border, Republican Gov. Greg Abbott, said the president's decision "reinforces Texas' longstanding commitment to secure our southern border and uphold the Rule of Law."

New Mexico Gov. Susana Martinez, a Republican, said she appreciated the Trump administration's efforts to involve states in the effort to better secure the border. Arizona Gov. Doug Ducey, also a Republican, tweeted that his state "welcomes the deployment of National Guard to the border. Washington has ignored this issue for too long and help is needed."