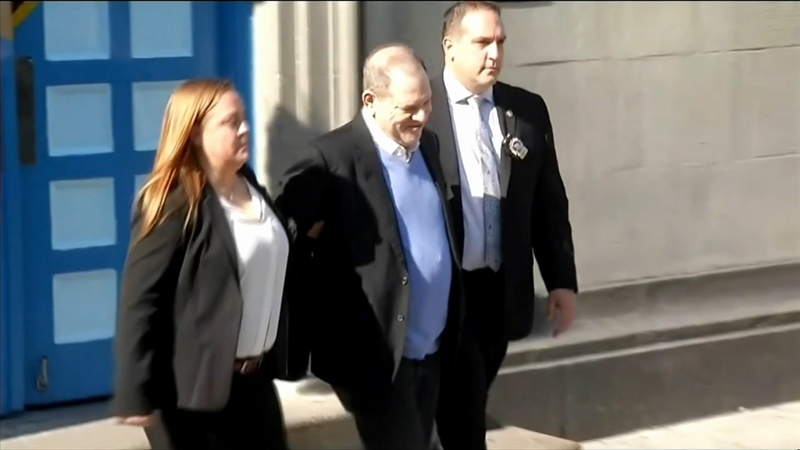 NEW YORK CITY -- Flinching when he heard himself described as a man who used power to prey on women, Harvey Weinstein was arraigned Friday on rape and other charges in the first criminal prosecution to result from the wave of allegations against him that sparked a national reckoning over sexual misconduct.

Seven months after the allegations destroyed his career and catalyzed the #MeToo movement, the once-powerhouse movie producer turned himself in to face the charges, which stem from encounters with two of the dozens who have accused him of sexual misdeeds ranging from harassment to assault.

"This defendant used his position, money and power to lure young women into situations where he was able to violate them sexually," Manhattan Assistant Attorney Joan Illuzzi-Orbon said in court. Weinstein raised his eyebrows as he heard it.

Weinstein has consistently denied any allegations of nonconsensual sex. His lawyer, Benjamin Brafman, didn't elaborate further on the denials Friday, saying he wasn't there "to try the case" at this point.

Watch raw video of Harvey Weinstein surrending to police in New York City on May 25, 2018.

A judge agreed to release Weinstein on $1 million bail, with constant electronic monitoring and a ban on traveling beyond New York and Connecticut.

A make-or-break Hollywood producer until the allegations destroyed his career last fall, Weinstein, 66, found himself surrounded by lights and cameras in a spectacle he couldn't control.

"You sorry, Harvey?" came a shout from a throng of media as the once powerful movie mogul walked into a lower Manhattan courthouse in handcuffs, his head bowed. Asked "What can you say?" he mildly shook his head and softly said "No."

Weinstein was charged with rape and a criminal sex act as well as lower-level sex abuse and sexual misconduct charges. 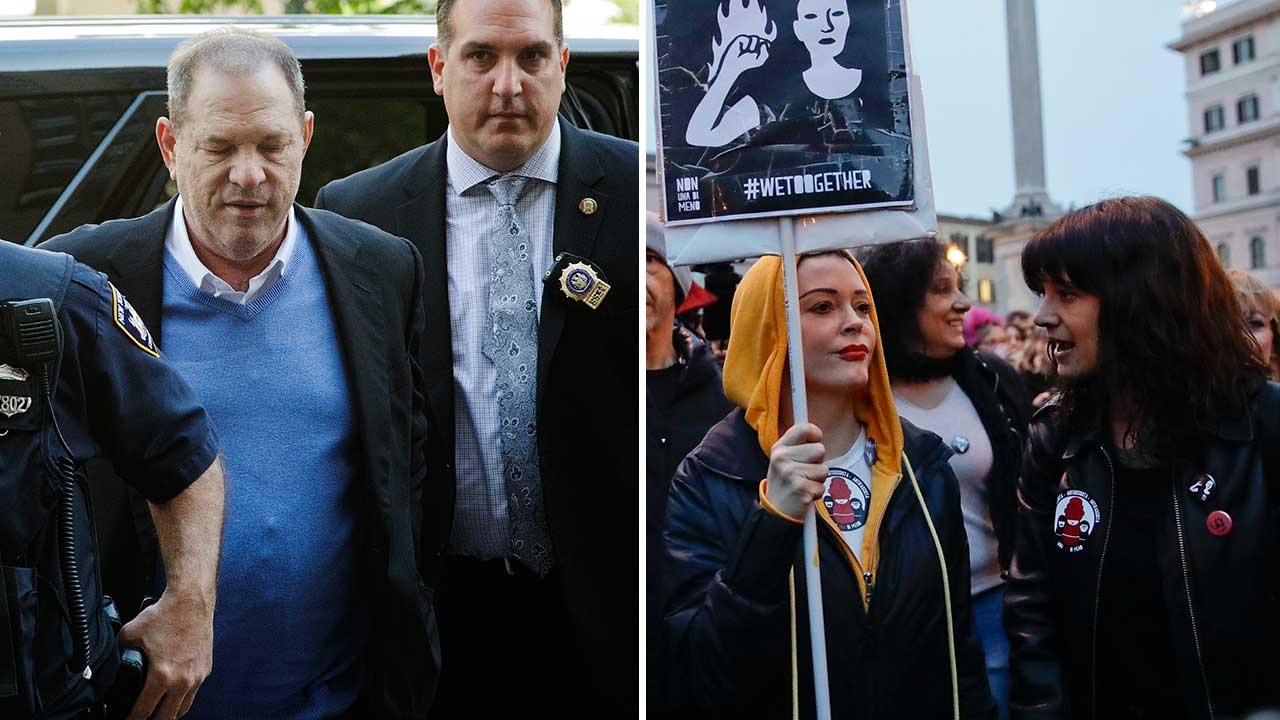 Rose McGowan reacts to Harvey Weinstein's arrest
On Friday Harvey Weinstein turned himself into authorities. Rose McGowan, the Women's March movement and more are speaking out about the man who faces a range of allegations, including rape, from about 80 different women.

Weinstein lumbered into a police station early Friday wearing a blazer and carrying books including "Something Wonderful: Rodgers and Hammerstein's Broadway Revolution," about the Broadway musical duo of Richard Rodgers and Oscar Hammerstein II, and "Elia Kazan," about the famed film director,

A law enforcement official told The Associated Press that the criminal sex act charge stems from a 2004 encounter between Weinstein and Lucia Evans, a then-aspiring actress who has said the Hollywood mogul forced her to perform oral sex on him in his office. She was among the first women to speak out about the producer.

The rape charge relates to a woman who was not identified. A court complaint says Weinstein raped her in a Manhattan hotel in 2013.

Brafman has previously said that Weinstein has consistently denied any allegations of "nonconsensual sex."

Evans confirmed to The New Yorker that she was pressing charges.

"At a certain point, you have to think about the greater good of humanity, of womankind," she told the magazine.

Evans told The New Yorker in a story published in October that Weinstein forced her to perform oral sex during a daytime meeting at his New York office in 2004, the summer before her senior year at Middlebury College.

Manhattan District Attorney Cyrus Vance had been under enormous public pressure to bring a criminal case against Weinstein. Some women's groups, including the Hollywood activist group Time's Up, accused the Democrat of being too deferential to Weinstein and too dismissive of his accusers.

A grand jury has been hearing evidence in the case for weeks.

In March, New York Gov. Andrew Cuomo took the extraordinary step of ordering the state's attorney general to investigate whether Vance acted properly in 2015 when he decided not to prosecute Weinstein over a previous allegation of unwanted groping, made by an Italian model. That investigation is in its preliminary stages.

More than 75 women have accused Weinstein of wrongdoing around the globe. Several actresses and models accused him of criminal sexual assaults, but many of the encounters happened too long ago for any prosecution. Film actress Rose McGowan said Weinstein raped her in 1997 in Utah, "Sopranos" actress Annabella Sciorra said he raped her in her New York apartment in 1992 and Norwegian actress Natassia Malthe said he attacked her in a London hotel room in 2008.

McGowan told the AP on Thursday that "the justice system has been something very elusive."

"I hope in this case, it works. Because it's all true. None of this was consensual," she said.

The statute of limitations for rape and certain other sex crimes in New York was eliminated in 2006, but not for attacks that happened prior to 2001.

New York City police detectives said in early November that they were investigating allegations by another accuser, "Boardwalk Empire" actress Paz de la Huerta, who told police in October that Weinstein raped her twice in 2010. She is not one of the victims in the case on Friday; hers was still pending, officials said.

Authorities in California and London also are investigating assault allegations. Britain has no statute of limits on rape cases; some of the allegations under investigation there date to the 1980s.

Harvey and his brother Bob Weinstein started his now-bankrupt company after leaving Miramax, the company they founded in 1979 and which became a powerhouse in '90s indie film with hits like "Pulp Fiction" and "Shakespeare in Love." The Weinstein Co. found success with Oscar winners "The Artist" and "The King's Speech."