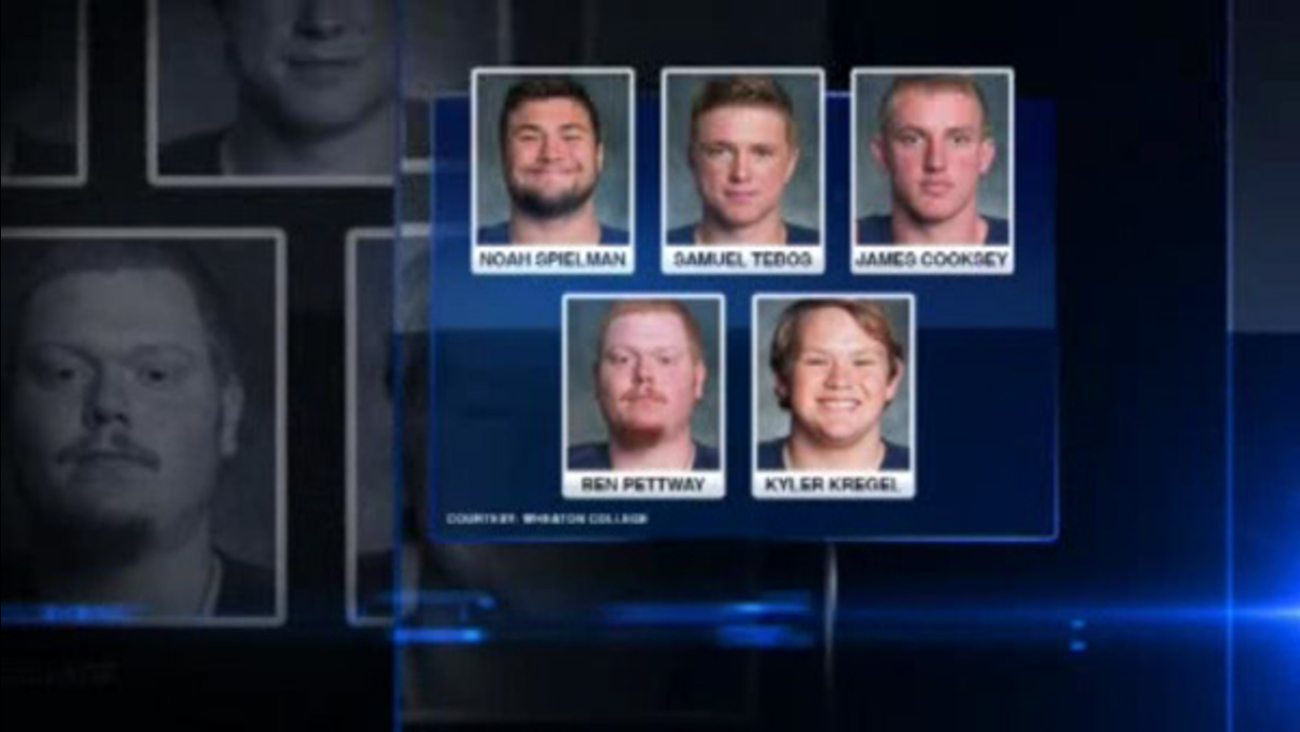 CHICAGO -- Five members of a Christian college football team in suburban Chicago face felony charges after one of their teammates alleged they duct-taped his hands and feet and attempted to sexually assault him with an object before dumping him half-naked in an off-campus park.

A judge signed arrest warrants and set $50,000 bonds for the players, who are expected to turn themselves in. As of Tuesday afternoon, none of them had done so, according to Paul Darrah, a spokesman for the state's attorney's office. Darrah said the most serious charge - aggravated battery - carries a maximum sentence of two to five years in prison.

Terry Ekl, an attorney representing the alleged victim, his client was attacked on March 19, 2016, while he was watching basketball on television from his dorm room on campus, about 30 miles west of Chicago. Ekl said the teammates tackled him, bound his hands behind his back with duct tape, put a pillowcase over his head and punched him when he yelled at them to stop.

Ekl said the student, a freshman at the time who is now 20 years old, alleges the five put him in the back seat of a car. With Middle Eastern music playing, he alleged, they made offensive comments about Muslims and told him that he was being kidnapped by Muslims who wanted to have sex with goats and that he would be their "goat" for the night.

He also said they "were dragging him behind by his arms," and pulled him so hard that he tore the cartilage called the labrum in both shoulders severely enough that he required at least two operations to repair the damage.

After the attack, the victim drove himself to a hospital where he was treated his injuries. Ekl said an emergency room nurse called police. He said his client left campus the next day and returned home to Indiana, where he's attending college.

Wheaton College said it was notified about the alleged attack that same month and, working with an "independent" investigator, launched an investigation.

"The conduct we discovered as a result of our investigation into this incident was entirely unacceptable and inconsistent with the values we share as human beings. ..." according to a statement, which said the school has "engaged outside experts" to review the school's anti-hazing policy.

The school said "disciplinary measures" were taken but, declined to elaborate, citing "federal student privacy protections." Ekl said the players were required to perform community service and write an eight-page essay about the incident but were not suspended from the team.

Wheaton Police Chief Deputy Bill Murphy said there were a number of reasons why the investigation took more than a year. He said several interviews had to be conducted, and medical records had to be obtained. Also, he said that because the students all reside outside Illinois, the interviews that began before the end of the school year could not conclude until the students returned to class in the following fall.

All are listed on the team roster, and three of them played in the game that the No. 4-ranked Division III team played on Saturday, according to the Tribune. Spielman is the son of Chris Spielman, an All-American linebacker at Ohio State and All-Pro linebacker in the NFL who spent the bulk of his career with the Detroit Lions.