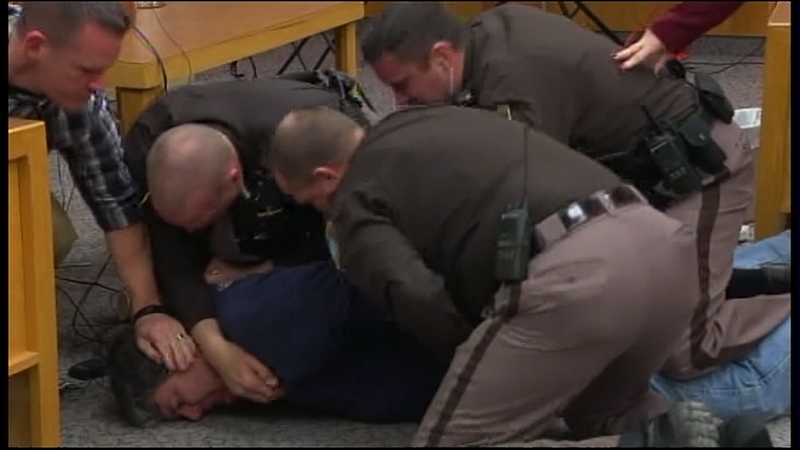 Father of Larry Nassar victims tries to attack him in court

CHARLOTTE, Michigan -- A judge says there's "no way" she'll punish a father of three victims of Larry Nassar after the dad tried to attack the former sports doctor in a Michigan courtroom.

Randall Margraves apologized Friday, a few hours after he charged toward Nassar during a sentencing hearing in Eaton County, Michigan.

Judge Janice Cunningham says a punishment isn't appropriate based on the crimes committed by Nassar and the anguish felt by families. But she also says it's wrong to "combat assault with assault."

Nassar must listen to scores of victims before he's sentenced next week for sexual assault. He's admitted molesting young gymnasts. He's already been sentenced to 40 to 175 years in prison in another county.

THIS IS A BREAKING NEWS UPDATE. PREVIOUS STORY BELOW

A father of three victims of Larry Nassar tried to attack the disgraced former sports doctor Friday during a court hearing in Michigan.

After two of his daughters spoke, the father, Randall Margraves, asked the judge for "five minutes" in a locked room with Nassar. The judge said she couldn't do that. He then asked for one minute, and later said he was a "distraught father."

The judge cautioned Margraves after he called Nassar a profanity. The father then rushed at Nassar, though he was quickly tackled by bailiffs. Two of his daughters had given statements earlier in court. They said their other sister also had been molested by Nassar.

Crying could be heard in the courtroom as Nassar was escorted out. Assistant Attorney General Angela Povilaitis told families in the courtroom to "use your words" and that violence "is not helping your children."

The incident came during the third and final sentencing hearing for Nassar on sexual abuse charges. The charges in this case focus on his work with Twistars, an elite Michigan gymnastics club.

More than 30 victims have given statements so far. During a similar hearing that ended last week, more than 150 girls and women came forward to say Nassar abused them under the guise of medical treatment.

More victims are expected to speak. The proceedings are likely to extend into next week.