Last hurdle of infertility: Couple speaks out after having baby through one of the first uterine transplants 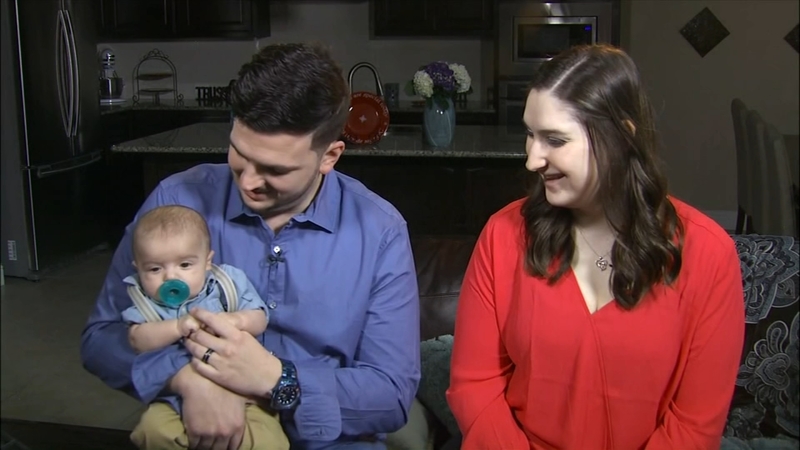 DALLAS -- A woman who thought she'd never be able to have a baby on her own is finally able to start a family thanks to a groundbreaking new transplant and the help of a selfless stranger.

Madison Gibbs is a healthy woman, but she was born without one thing.

"I did not have a uterus," Gibbs said.

The Dallas native, who is now 22, was born without a uterus. It's a condition called Mayer-Rokitansky-Küster-Hauser syndrome or MRKH, and is found in one in 5,000 females.

Doctors only discovering she had the condition after she didn't get her period as a teen.

"So I have ovaries, fallopian tubes, eggs, everything else except for a uterus to actually carry a baby," Gibbs said.

It was news she never expected because she always planned on having a family, and when she first learned of her condition six years ago, there was no treatment available.

"I was devastated, to be honest," she said.

She only told one person about her diagnosis, her then-boyfriend and now husband, Mitchell.

"I just was going to be there for her no matter what," he said.

The couple married in 2018 and planned on moving forward with surrogacy or adoption. But to their surprise, within weeks of saying their vows, a local hospital was recruiting women to participate in a clinical trial for a uterus transplant.

"I was honestly blown away. It's in my backyard," Gibbs said.

Gibbs immediately signed up and after a battery of medical tests, she was accepted into the trial, which was co-run by Dr. Liza Johannesson at Baylor University Medical Center.

"I mean, it's called the last hurdle of infertility, meaning that this is the only course we haven't been able to treat," Johannesson said.

She went through egg retrieval and created embryos, and then the uterus donated by a stranger was transplanted in October 2019.

"We had hundreds of women calling into Baylor saying, 'I want to donate my uterus to someone,' they don't even know," Johannesson said.

Four months after the transplant, Gibbs was pregnant.

Baby Lincoln born a year to the date of Gibbs' transplant.