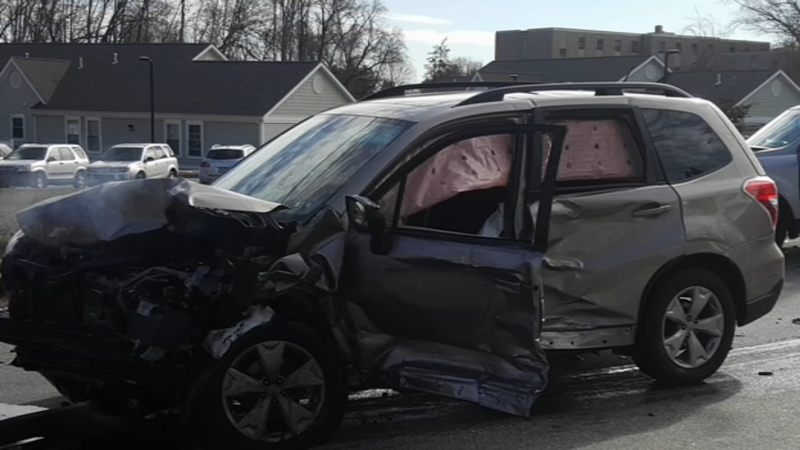 VIDEO: Utility workers jump into action to save crash victims

SPRINGFIELD, Pa. (WPVI) -- Two utility company workers who traveled to our area to help restore power from our recent storms are now being called heroes - not for turning the lights back on, but for helping save the lives of people who were involved in a bad crash in Delaware County.

The men happened to be right there when it happened and they jumped into action.

"It was frightening, it really was. I could tell he was in distress," said Darryl Davis.

Last week Davis was beginning his 16 hour work day on his way to restore power to customers, when a horrific multivehicle accident occurred.

It happened at 8:45 a.m. Tuesday along route 320 in Springfield. A car tried to cut him off and ended up pushing another car into oncoming traffic.

"They had a head-on collision. One car going north, another going south, and it was just a multiple car pileup right in front of me," Davis said.

Davis is a lineman for ComEd, an Exelon company and sister company to PECO. He and his team were brought in from Chicago last Saturday to assist with the widespread outages. Little did he know he'd return home a hero -- though he doesn't consider himself one.

"I could see the guy that was in the head-on collision trying to get out and his car was starting to smoke up," Davis said.

Davis and his partner, Jasper Brown, jumped into action.

Davis tried to open the driver's side door but it was stuck. So he opened the back door just as the victim was becoming overwhelmed with the heavy smoke.

Davis just kept saying to himself: "Get him out, get him out as fast as I can. And get everybody to safety and get away. We didn't know what the car was going to do," he explained.

Brown tended to the man while Davis ran to the second accident victim, an elderly man. He was unable to get out of his car.

"He looked like he was really in shock he had to be in his upper 80s," Davis said.

Police and paramedics arrived minutes later and took over. The victims are expected to be okay, though Davis and Brown say they never really exchanged words and don't know who they are.

The two say they just happened to be in the right place at the right time.

"We are out here trying to do everything we can to get the lights back on. We were on our way," Davis said.

Davis credits his safety training with ComEd over the three decades for his quick thinking that day.