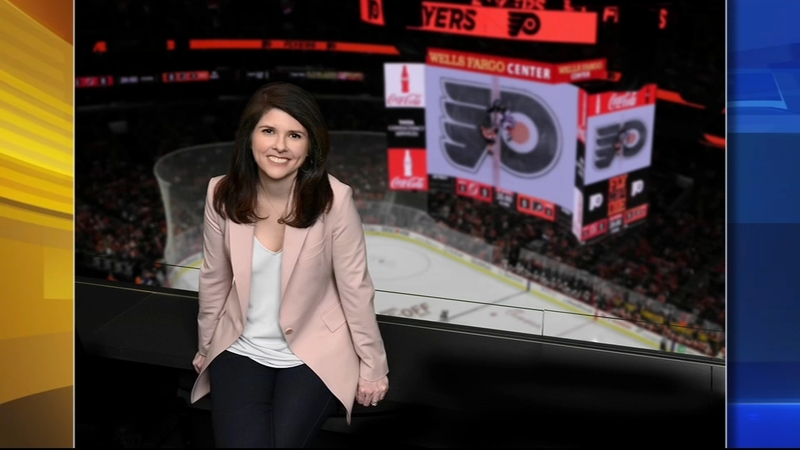 PHILADELPHIA (WPVI) -- Valerie Camillo, the president of business operations for the Philadelphia Flyers and Wells Fargo Center, has broken the glass ceiling in the NHL. She's the first female to hold the title in the league's history.

"My first season someone mentioned to me that the team photo was going to be the first team photo for the Flyers that ever featured a female executive, and I thought, 'Wow!" Camillo exclaimed.

Wearing her nicest pair of stiletto heels, she headed down to the ice and realized that her choice of shoes wasn't so practical.

"I'm like, I'm gonna die. I'm gonna wipe out in front of the entire team," she recalled. "And Paul Holmgren, instantly saw my dilemma, got up and came over and offered a hand."

Camillo knew she broke the glass ceiling when the Flyers quite literally helped break the ice. She took over the business operations for the team in 2019.

"It's an honor and a blessing. It's something I want to do a phenomenal job at so I can be a standard bearer and a success, and break down some of those mental barriers that some might have. (I) also want to be an inspiration to young women and young girls in their careers," she says.

Camillo understands what it's like to be the only woman at the table. Before the Flyers, she was the chief revenue and marketing officer for the Washington Nationals and a consultant in the NBA before that.

So this position marks a hat trick of sorts.

While women in management positions in pro sports is rare to begin with, hockey seems to lag behind them all.

A survey taken in 2019 pointed out that while females make up 40% of the fan base, they hold less than 5% of the jobs in hockey operations.

A Horsham woman is making history as the NCAA's first Black head coach of hockey.

To that end, as young girls who love the game slowly realize they too can someday help run a team, Camillo says the key is not to conform as the sports world continues to evolve.