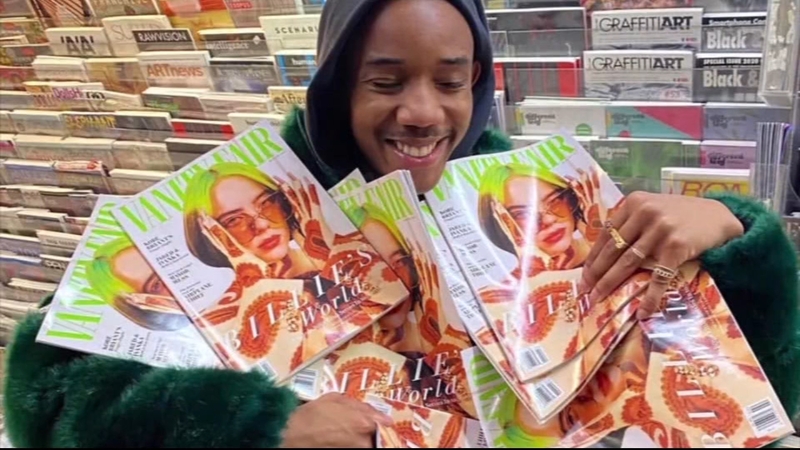 PHILADELPHIA (WPVI) -- A South Philadelphia native is sharing the spotlight with a famous face on the latest issue of Vanity Fair.

Yes, he's the man behind the lens of the magazine's March issue, which hit stands last week. The cover girl is Billie Eilish.

He says he looked at all of Eilish's previous covers so that he could make his art for the issue stand out.

It's something he says he learned while a student at Charter High School for Architecture and Design in Center City Philadelphia.

"This has been the one thing that I've wanted to do since I was 15," he said. "When I was in C.H.A.D, me and my friends would go to the Barnes & Noble every day and pick up a different magazine. So now it's like, I've been crossing off all the magazines I've been picking up."

Lemons' work includes photographing stars like Spike Lee, and has been featured in the New York Times, Vogue, and Allure. His work has even been displayed at the Philadelphia Museum of Art.

While he says this is just the beginning, he admits his biggest accomplishment will be how he can open the door for those who follow.

"I'm just being myself and I think that's the one thing that I really want to drill down to anyone who is looking up to me, just be authentic," he said. "You can really just do what you want, and not a lot of young black kids get to hear that. Just do it!"
Report a correction or typo
Related topics:
societyphiladelphiaartentertainmentblack history monthphotography
Copyright © 2022 WPVI-TV. All Rights Reserved.
TOP STORIES
AccuWeather: Scattered Downpours This Evening
Action News speaks with Philly officer following July 4th shooting
2nd bullet found after officers shot at Philly's July 4th celebration
Gun violence issues raise concerns for visitors traveling to Philly
Kenney issues statement on 'happy when I'm not mayor' comment
Philly opens 'lost and found' for those who fled July 4th shooting
Police investigate after woman says unleashed pit bull killed her dog
Show More
What now? Councilmembers want increased security after July 4 shooting
Highland Park parade shooter charged with 7 counts of murder
Fireworks in Sea Isle City cut short by explosion on barge
200,000-pound shipment of baby formula arrives at Philadelphia airport
Man found inside trunk of burned vehicle in Fox Chase identified
More TOP STORIES News