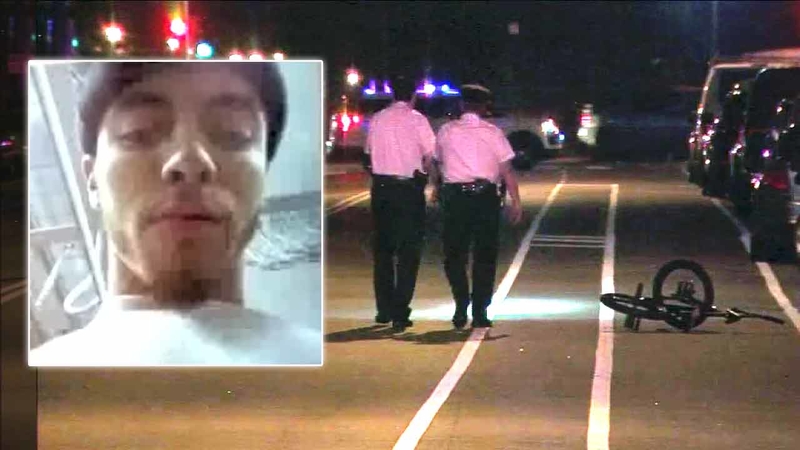 OLNEY (WPVI) -- Family members have identified the 19-year-old man struck and killed while riding his bicycle in the Olney section of Philadelphia as Lorenzo Velazquez.

His sister, Alondra Pacheco, says her brother had just celebrated a birthday.

Velazquez was struck at 11:45 p.m. Thursday at C and East Ashdale streets by a driver who did not stop.

PPD speaking with person of interest for fatal hit and run in Olney. It's the owner of car they say hit and killed male, 19, on bike @6abc

Philadelphia police now say they have located the owner of the striking vehicle.

That owner is being called a person of interest in the case. It is not known if that person was driving the car at the time.

Velazquez loved BMX bikes and had his whole life ahead of him, his sister told Action News.

"He was just about to start school on Tuesday for college," she said. "He was about to get deployed to training for the Navy in October."

Velazquez posted a video a few days ago on his Instagram page. It shows him doing tricks on his bike.

Watch Action Cam video from the scene where a driver struck a 19-year-old man on a bike, dragging the man and leaving him for dead.

On Thursday night he had just left a friend's house and was on his way home to Hunting Park. Pacheco says he texted their mother ten minutes before he was struck.

Witnesses say the victim was riding his bike south on C Street.

When he crossed the intersection, a car going west on Ashdale Street hit him.

Velazquez was knocked off his bicycle, and the bike was dragged about 100 feet. Private surveillance cameras captured the car as it took off.

"I thought a car hit two, three cars. But I came out... his body was lifeless at first," Florence Travers told Action News. "And I went up to the body, and I see him breathing. The ambulance came within minutes."

Velazquez was rushed to St. Christopher's Hospital for Children.

"Whoever did this needs to turn up," said his sister. "I don't care how it happened, if they were drunk, on the phone.... You took an innocent life."

Officers located the car - a 2006 white Honda sedan - around 6 a.m. Friday in the 500 block of West Duncannon Street.

It was towed it to a police garage.

Accident investigators interviewed the owner of the car Friday morning.

That person has since been released.

So far there have been no arrests in the case.