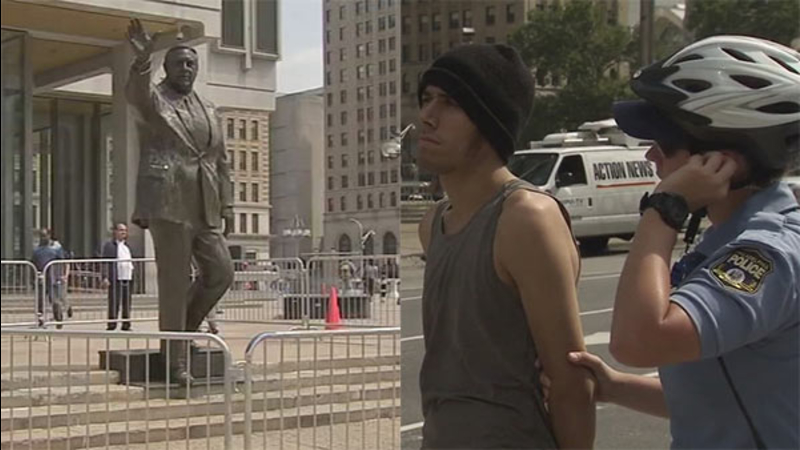 PHILADELPHIA (WPVI) -- Philadelphia police arrested a man after he threw eggs at the statue of former mayor Frank Rizzo outside the Municipal Services Building across from City Hall.

Philadelphia police officers chased the man and took him into custody.

The suspect is identified as a 25-year-old man from Maplewood, New Jersey. He has been charged with Disorderly Conduct and Criminal Mischief.

The man is far from the only one taking action, in a variety of ways, to show outrage at monuments many consider glorify racism around the country.

Overnight in Baltimore, four Confederate monuments were quietly removed by the city's mayor.

The spotlight is now falling on the statue of Rizzo, the former law-and-order mayor many critics say used brutal tactics that disproportionately targeted African Americans.

Barricades were set around the statue after an apparent act of vandalism Tuesday night.

"We are not saying necessarily that it has to stay here, but we do believe that it's a historic symbol in Philadelphia," Ferguson said.

Asa Khalif, who heads Black Lives Matter PA, claims Rizzo, the mayor from 1972 to 1980, should not be honored and the statue should be gone.

"He was a racist bigot and a homophobe and I think his legacy is that in terms of how he interacted with black and brown people was that of violence and tyranny," Khalif said.

But Jody Della Barba who used to work for Rizzo says critics have it all wrong. She says he was not a racist. Barba says Rizzo was a tough on law breakers of all kinds and won the respect of hard working African Americans.

On Monday, Councilwoman Helen Gym tweeted, "All around the country, we're fighting to remove the monuments to slavery & racism. Philly, we have work to do. Take the Rizzo statue down."

All around the country, we're fighting to remove the monuments to slavery & racism. Philly, we have work to do. Take the Rizzo statue down.

He also had strong words about President Donald Trump who has doubled down on his claims that both counter-protesters and white supremacists are to blame for the deadly attacks in Virginia.

"I think the Republican Party and the country need to come to grips with the fact that the guy is out of control," Kenney said.