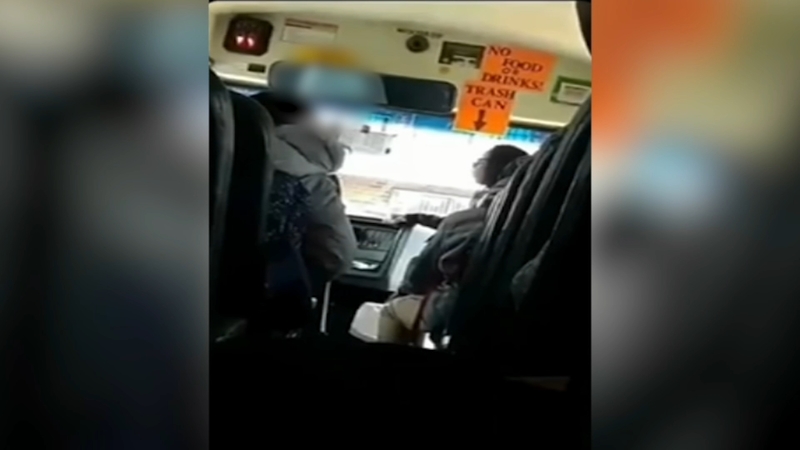 VINELAND, New Jersey (WPVI) -- A parent in Vineland, New Jersey was arrested after authorities said she assaulted a bus driver picking up students on their way to school.

Video of the incident captured by several Vineland Public School students has been circulating both online, and among parents who are outraged by the incident that took place early Tuesday morning.

In the video clip, you can hear the woman, identified by police as Ladia Lazzarini, yell at the driver.

"If I find out that you are unsafely driving my child, woman, I will (expletive) you up. Do you understand me?" she shouts in the roughly four-minute-long clip.

Parents said the incident occurred at the Brewster Garden Apartment.

In the clip, the woman appears to be berating the Sheppard Bus driver for unsafe driving.

"Why you hitting speed bumps and these children's heads hitting the roof?" she asks.

But, she then seems to turn her attention to a student, threatening him in the process.

The why of it all is still unclear.

Police arrested Lazzarini for aggravated assault on the bus driver.

"You are not allowed to do this on my bus," the driver is heard saying.

Video obtained by Action News by the parent of another student appears to show the woman push the driver.

The same clip goes on to show what happens when other parents try to intervene.

Students look on as the parent is seen restraining the woman after the altercation in which police say both parties claim they were injured.

"My son was crying and he was so traumatized he didn't want to go to school," said one parent who asked not to be identified.

This parent said her son recorded the harrowing moments and sent her the play-by-play in a series of text messages:

"He pinned her to the bus "

"She was put in handcuffs"

"Everyone is freaking out"

The school district, who sent parents a notification later in the day about the incident, would only say they are cooperating fully with law enforcement.

Sheppard Bus issued a statement to Action News that said in part, "We would like to commend our driver for her professional reaction to a violent situation that was in the best interest of the students."