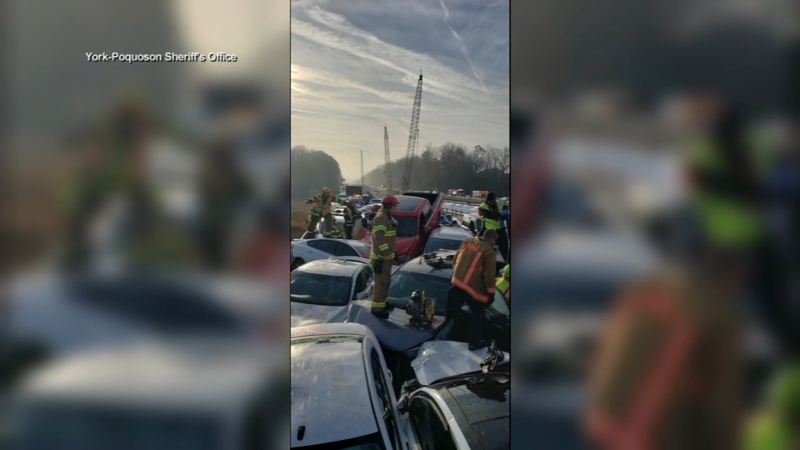 Police: Ice and fog contributed to 69-car pileup that injured 51 in VA

WILLIAMSBURG, Va. -- Viriginia State Police Department officers said heavy fog and icy roads may have contributed to a 69-car pileup on a major interstate in Virginia.

Virginia State Police Department Sgt. Michelle Anaya said no one died in the crash on Interstate 64 near the bridge over Queens Creek in York County, but more than 50 people were injured, including two people in critical condition. Crews spent several hours clearing the roadway and reopening lanes of traffic.

At least 35 people were injured, 2 critically, in a massive 63-car pileup on one of the busiest travel days of the year.

Driver Darryl Butler spent Sunday evening in a hospital room, but Sunday morning he was driving to work when he said the car behind him slammed into him.

"Just another day. I was on my way to work. I was going about 30-35 miles per hour and the fog was really deep. And the person behind me had to have been going 70-75," Butler said. "I proceeded to slow down and they did not slow down, and I was struck from the back to the extent that both of my airbags were deployed. I had instant whiplash."

Butler said his car was hit six or seven more times after that first crash, and he saw one truck flip into the air.

Several were injured, some critically, in a 35-car pileup on one of the busiest travel days of the year.

"It was chaotic but at the same time it was a presence you could feel the energy. God was present," he said.

Butler credited his faith with keeping him strong through the experience.

"I kinda get a little emotional about this cause my mom passed away in a car accident, and to watch my life flash before my eyes, knowing that is how my mom died, knowing that God allowed me to see today and talk to you guys knows I'm here for a purpose."

Investigators said because of the size of the crash, a report will not be available for a few days. No charges have been filed at this time.
Report a correction or typo
Related topics:
trafficvirginiacar crashtraffictraffic accidentcrash
Copyright © 2022 WPVI-TV. All Rights Reserved.
RELATED
69-car pileup leaves 35 with injuries, 2 life-threatening
TOP STORIES
AccuWeather: Spotty Showers Today
Officials ID 5 killed in Pottstown explosion; most were children
Official admits police made 'wrong decision' in TX shooting
Victim of elementary school attack says it could have been prevented
Police: Store owner robbed, assaulted with brick in North Philly
Dann Cuellar retires after 34 years at Action News
Another Trenton, NJ firehouse hit by gunfire
Show More
Rainy start to Memorial Day weekend at the Jersey Shore
Bank employees help kidnapped woman after she asks for loan
Massacre survivor says gunman told them: 'You're all gonna die'
4th grader 'did what she had to to survive' Uvalde shooting, aunt says
North Penn holds farewell parade for retiring superintendent
More TOP STORIES News