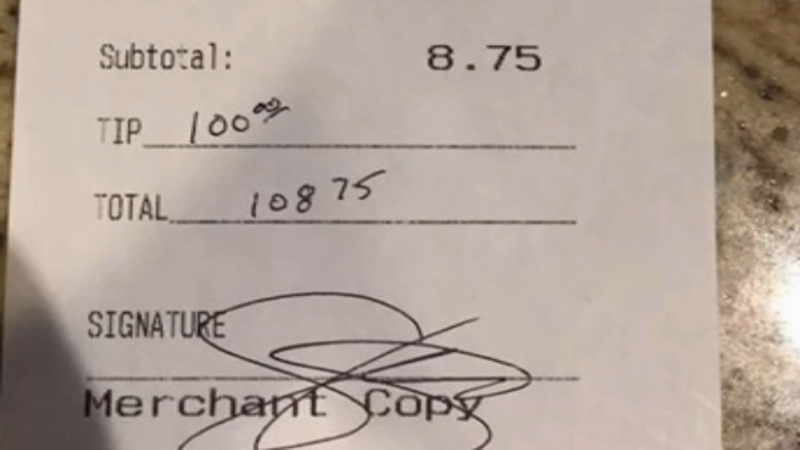 VOORHEES TWP., N.J. (WPVI) -- A 23-year-old waitress, who is nearly 8-months pregnant, says she was absolutely floored by one of her customer's kind gestures.

"He ended up just ordering a salad and water. He was real simple," said English.

The officer, who has remained anonymous, apparently overheard her tell other customers asking about her pregnancy that this was her first.

"He recently just had his first child so he was a little emotional and saying that was the greatest day of his life and it's gonna change her life," said Nick Hionas, the owner of the diner.

He left before English realized what the officer did.

He wrote her this message on his receipt: "Enjoy ur 1st. You will never forget it."

"I thought it was a mistake, I didn't think that that was right. But I asked the hostess like four different times, 'Is that right?' and she confirmed it was and she showed me the receipt," recalled English. "I started crying. This doesn't happen. It was really genuine, it was really nice."

Her father, Brian Cadigan, posted the story on Facebook and it went absolutely viral.

Calls have been coming in to the diner from all over the country.

"They wanna know if they can help her because it's the first child. It's the gesture about somebody helping somebody else," said Victor Sierra, the manager at the diner.

The calls kept coming in to the Lamp Post Diner from as far away as Minnesota; it was someone who also wanted to make a donation to English for the birth of her first child.

English says this story resonates with others "because there's a lot of bad things going around about cops."

"You see all the bad stuff being portrayed about all police officers these days and there's some really good ones out there," English said.

English, who is expecting a baby girl on April 1, plans to work a couple more weeks.

She says the $100 tip is what she would make on one of her shifts, and that's going take a big load off her thanks to the anonymous Voorhees officer.