Most OK, some confused with roll out of electronic voting machines in Philly 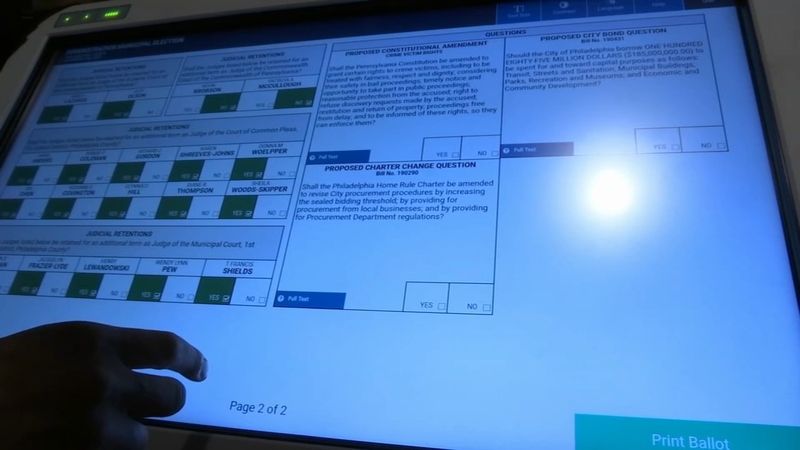 Most OK, some confused with electronic voting machines in Philly

For the most part, Action News has been getting positive reports from voters and poll workers who said they're settling in well to the new electronic voting machines, but there's still a learning curve for some.

The turnout has been traditionally low for some local elections, but it's proving to be a convenient time to debut new electronic voting machines.

"Straight off the bat, it was pretty quick and easy to get in there. It was a little bit difficult to tell when you're looking at it because it's split across two screens," said Point Breeze voter Alex Hirsch

Other than that, Hirsch was happy with his experience while voting at the Wharton Square Rec Center in Point Breeze.

The touch screen was a little difficult for some senior citizens, who had the process down over the years before the electronic machines were introduced for this election under a state mandate.

"I thought it was very complicated for somebody who don't know what they're doing" said Point Breeze voter Denise Brewington.

Poll workers are ready to help when any issues arise while casting a ballot.
"I want to anticipate how the seniors are going to do. I'm going to be standing right there making sure they know what to do," said precinct manager Tiphanie White.

White said she grew up spending time at the Wharton Square Rec Center while her mother and grandmother worked the polls.

Now she's helping to lead the way as new technology is ushered in.

"I need everybody to come out and vote because it's so important," White said.

As the day continues, election officials will get a better assessment of any major problems they faced.