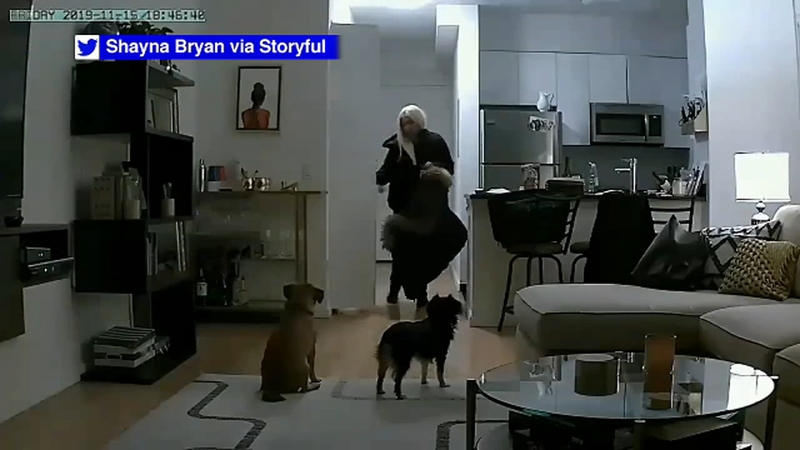 NEW YORK -- An employee of a popular dog walking app is under arrest and accused of stealing from a client.

Shayna Bryan, a client of Wag in Queens, New York, took to Twitter to post surveillance video she says shows one of the company's employees robbing her home on Nov. 15, 2019.

The footage tweeted by Bryan from her surveillance camera captures the dog walker she hired, allegedly stealing $800 worth of items -- including a coat and designer purse.

Bryan watched it all happen on her phone while she was out to dinner. She sounded an alarm, and even told the woman through a speaker system to put the stuff back. Bryan says the woman didn't.

Bryan said on Twitter that she was hesitant to involve the media, but felt she was left no choice after her emails to Wag initially went unanswered.

Wag said it refunded Bryan for the walk and deactivated the dog walker's account.

The company's VP of Trust and Safety and Corporate Affairs, Heather Rothenberg, said Wag is working with local authorities on the investigation and released the following statement:

"Every walker must pass a vetting process and a background check before being allowed to join the Wag platform. Our screenings include an application and verification process, as well as a background check that includes a Social Security number trace, a facial recognition check against all official documents provided, a document check, a national criminal check, a county criminal check, a sex offender check, and a global watch list check. Every applicant must pass an online test covering dog safety, equipment, and handling knowledge before we allow them on the Wag! platform to care for your dog."
Report a correction or typo
Related topics:
crimedogscaught on videodogappcaught on camera
Copyright © 2022 WPVI-TV. All Rights Reserved.
CRIME
South Jersey and Delaware dealing with rising in carjackings
1 dead, 2 injured after convenience store shootings
Del. man accused of taking upskirt photos of girl at Walmart
Man charged with murder in deadly Old City pipe beating
TOP STORIES
Teen took action after child hurt in bonfire explosion: Officials
Cause of death revealed for 23-year-old woman found dead after date
FDA halts use of antibody drugs that don't work vs. omicron
Carjackings reported at Wawa parking lots in Delaware
AccuWeather: Back to the 40s Today
SAT going digital in shifting college admissions atmosphere
Another volatile day on Wall Street. Is it time to worry?
Show More
Main Line home burglary caught on video
Omicron-specific COVID-19 vaccine starts clinical trials
Fans boo Flyers as team loses 12th straight
US orders 8,500 troops on heightened alert amid Russia concerns
Officials ID victim killed in Montco crash; 4 others seriously injured
More TOP STORIES News