A staff member at a school on the Main Line, who says she was fired for being in a same-sex marriage, is speaking out for the first time.

LOWER MERION TWP., Pa. (WPVI) -- A staff member at a school on the Main Line, who says she was fired for being in a same-sex marriage, is speaking out for the first time.

Margie Winters and her wife sat down with Action News on Thursday.

After eight years at Waldron Mercy Academy in Merion Station, Winters was fired at the end of June.

She says a parent found out about her marriage and complained to school officials.

The principal, who knew that Winters was gay, gave her a choice to resign or be fired.

"In my mind, for me to resign means that what this woman and what she believes the church is saying is true and I don't believe that's true," said Winters.

More than 100 people, including parents, alumni and some students, met at Jack's Firehouse in Fairmount on Wednesday night to rally behind Winters.

Organizers of that event say they will continue to fight to help Winters get her job back. 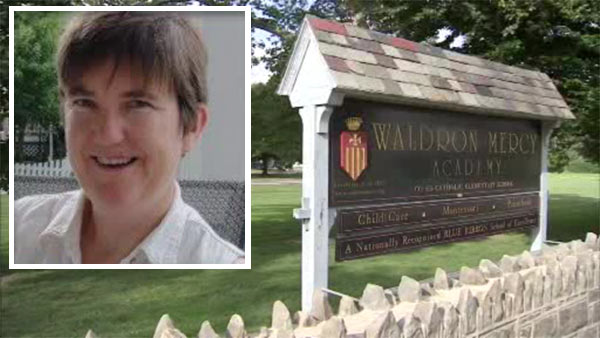